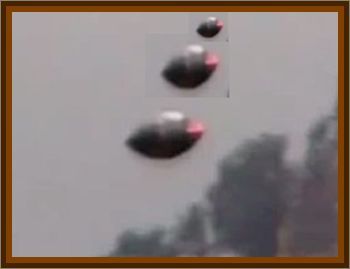 I sighted three objects at 11:00 or 11:30 p.m. They approached from the north. They came directly towards me until at one point they were virtually overhead.

They were all three flying in a very close formation in a line three abreast. They were just below cloud level.

When they were almost directly above me you could make out the shape of them quite easily.

They were completly silent with no visible sign of propulsion. No lights on them at all. They matched the overcast sky almost pefecly. They were in my sight for I would say about three to four minutes.

One of the objects on the outside of the three then made a perfect right angle turn away from the other two objects. At that point they were lost from my view because of nearby buildings.

The exact year I saw the three objects over the town I was living in at the time was 1971. It has taken me all these years to talk about the sighting because at the time of the sightings I did not wish to make my sighting too public because I did not want certain types of people knocking on my door.

Plus all those years ago there was no such thing as the internet where you could talk about these things to people and still reatain a certain amount of anonymity.

So that is why I waited all these years to tell my story. At the time of my sighting I was interested in astronomy and was building my own 6" Newtonian reflector telescope. So as you can appreciate at that time I used to spend quite a lot of time looking at the sky. On this particular evening I had just gone outside to put the milk bottles out for the milk man to collect the following day.

The year was 1971 it was a Friday night but I have to be honest I'm not sure now what month of the year it was.

To carry on with the story, as I was outside in the back garden of the house I happened to glance up at the sky. The night was fine and dry but the sky was very overcast with cloud.

What I saw then I can hardly beleive I saw even today sometimes. What I saw were three objects heading in my direction. They were well below the level of the clouds and were very easily seen by the naked eye. The objects were in a perfect formation three abreast. They were also very close together. Far closer to each other than coventional aircraft would fly under normal conditions. They approached me in complete silence until they were almost directly above my head. I would guess there speed, but it is only a rough guess, at no more than 15 miles per hours if that. When the objects were almost overhead there shape could be easily defined without the aid of binoculars.

I have yet to see after all these years of seeing pictures of UFOs still to see an object with the same shape as the three I saw.

I would best describe it as Like a football cut exactly in half, but with the bottom edge slightly rounded. Viewed from above or below as I saw the object it would appear perfectly round. The color of the three objects was almost a perfect match with the night sky.

I would describe the color as a dull brownish grey. All three were perfectly silent with no visible signs of propulsion. Which would easily been seen from the distance they were from me by this time. There were no lights on them at all. They just seemed to be gliding across the night sky.

Just before the objects went from my view because of the surroundings, one of the objects made a perfect 90º turn away from the other two. But unlike conventional aircraft, it did not turn in a radius. One minute it was flying in a forward direction, then in an instant it changed direction. The other two objects continued to fly southerly. The objects had approached me from the north. The single object I would say headed west.

At that point I lost sight of the three objects over the roofs of the nearby houses. I mentioned my sighting to my work colleagues the very next day at work but I think they were a bit skeptical about what I had seen the previous night. I can't say I blame them. I think I would be too if someone told me about such a thing.

Other than telling a few people at work at the time, I did not make the sighting too public. I still tell peole about my sighting even today when I get into conversations about UFOs and the like. But I think they take what I tell them with a pinch of salt.

All I would like to add to my story, is the fact that in my opinion the three object I saw that Friday night in 1971 were definitly not manufactured on this planet.