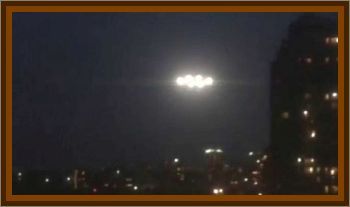 Multiple witnesses, including a local off duty police officer, watched in wonder as an array of yellow lights flew in formation in suburban New Jersey near New York City late in the evening of July 14, 2001 into the early morning of the following day. A short time later, at around 12:30 a.m., another witness, Carteret police Lt. Dan Tarrant, reportedly received a call at home from his 19 year old daughter, who was out with friends and had seen strange lights in the sky. Tarrant said that he then stepped outside to take a look, and what he saw was astounding, 16 golden/orange colored lights, several in a V type formation. Others were scattered around the V.

Tarrant told a local newspaper, that the mysterious lights flashed across the sky for about 10 minutes, then faded one by one into darkness.

US space officials say the lights were not from the orbiting space station, or shuttle, or anything else that can be explained. Likewise, officials at Newark International Airport and at area military bases say they didn’t receive any reports of odd planes passing overhead or pilots seeing strange lights.