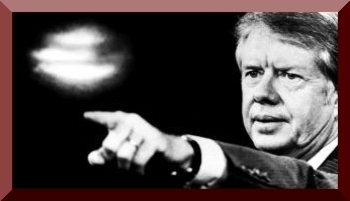 One evening in 1969, two years before he became governor of Georgia, Carter was preparing to give a speech at a Lions Club meeting. At about 7:15 p.m., one of the guests called his attention to a strange object that was visible about 30° above the horizon to the west of where he was standing. Carter described the object as being bright white and as being about as bright as the moon. It was said to have appeared to have closed in on where he was standing but to have stopped beyond a stand of pine trees some distance from him. The object is then said to have changed color, first to blue, then to red, then back to white, before appearing to recede into the distance.

Carter felt that the object was self-luminous, but not a solid in nature. Carter's report indicates that it was witnessed by about ten or twelve other people, and was in view for ten to twelve minutes before it passed out of sight.

There were about twenty of us standing outside of a little restaurant, I believe, a high school lunch room, and a kind of green light appeared in the western sky. This was right after sundown. It got brighter and brighter. And then it eventually disappeared. It didn't have any solid substance to it, it was just a very peculiar looking light. None of us could understand what it was.

He later stated all of a sudden, one of the men looked up and said, Look, over in the west! And there was a bright light in the sky. We all saw it. And then the light, it got closer and closer to us. And then it stopped, I don’t know how far away, but it stopped beyond the pine trees. And all of a sudden it changed color to blue, and then it changed to red, then back to white. And we were trying to figure out what in the world it could be, and then it receded into the distance.