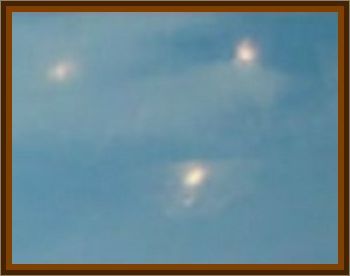 The two pilots who witnessed the incident were Lieutenant Colonel John L. McGinn & Lieutenant Colonel John R. Barton, both veteran fliers with distinguished military careers. At the time, both men were assigned to the Pentagon with highly classified assignments and were familiar with even the most secret foreign and domestic aircraft designs.

That morning the two pilots were at Hamilton Field north of San Francisco. They requisitioned a twin engine B-25 bomber for a cross-country flight. They took off headed for Colorado with unlimited visibility and perfect flight conditions. Between Sacramento, CA., and Reno, NV, the two officers entered the Green 3 aerial highway to Salt Lake City, UT. At 3:40 p.m. MST while at 11,000' over the Carson Sink area east of Reno, the two fliers spotted 3 aircraft ahead of them and to their right. At first they assumed that the unknown aircraft were F-86 fighters, based on their movements, but realized that aircraft were far too high in the air space. Moreover, the aircraft were flying in a perfect V formation, which was highly unusual for military jets.

When the B-25 drew closer to the aircraft, McGinn & Barton saw that the aircraft were bright silver in color with a delta-wing airfoil, but without tails or flight canopies, which every known aircraft possessed. The only break in sharply defined, clean upper surface of the triangular wing was a definite ridge that ran from the nose to the tail.

Neither men had previously seen anything remotely resembling the unknown craft. As the two pilots watched, the 3 unknowns made a left bank and flew quickly to within 400 - 800 yards of their B-25, which was an uncomfortably short amount of space in the air. The two men estimated the speed of the unknown aircraft to be at the very least three times that of any conventional jet known to them. After 4 seconds, the aircraft sped away out of the vision of the pilots.

When McGinn & Barton landed in Colorado Springs, they contacted Air Defense Command Headquarters and learned that no civilian or military aircraft had been anywhere near the Carson Sink at the time of the incident. In particular, all known delta-wing craft, then flown exclusively by the Navy, hadn't been anywhere in the vicinity. The nearest such craft, which were painted dark Navy Blue, were known to be on the West Coast at the time.

The two men dismissed the suggestion that they had seen F-86 jets, since they were intimately familiar with the design of that craft. Air Defense Command relayed the report to Project Blue Book. An investigation was started into the incident, but the incident was officially left as unexplained.