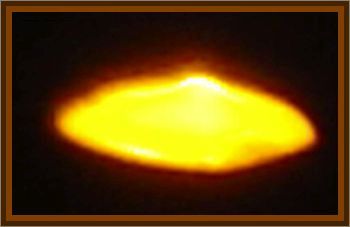 My name is Alex Carrara and I am 17 years of age. My family live in Geneva, Switzerland. We were spending the Christmas holidays in Kimsar, Rajahstan State, India. On Christmas Eve, December 24, 1997 I was standing outside our rented villa with my parents and brother and sister when we noticed a crowd of ten to twelve local people looking up at the sky. When we looked up also, we were struck by the sight of a bright yellow or orange UFO, soundless, with a yellow/orange glow or aura emanating from it.

The UFO approached Kimsar from the East at an extremely high altitude flying about at between 50° to 70° above the horizon. Some of the local witnesses argued that it was a satellite, but the direction of the object wasn't straight like a satellite. The object followed three different courses. I know the sky well and have been studying astronomy for years.

I know this was not a star. It couldn't have been a distant electric light because there are no lights in Kimsar because there is no electricity.

The UFO performed its strange turning manoeuvres for another five minutes before it disappeared in the West. We were left in doubt about what we had all seen. It was spectacular and strange to witness.