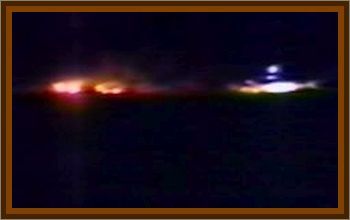 Housewife Diane Labenek was home when she heard her dogs barking. When she looked out the window to investigate, she saw a UFO type object in a field nearby with red flames and lots of smoke. The ship then lifted up and disappeared into the trees. Diane claimed that about 10 minutes after the ship left, a helicopter flew over the area where she saw the lights, and then flew over her house and vanished.

Diane went to the site the next day, but she found nothing and only told her husband and mother about the incident.

Six months later in February of 1992, Bob Oechsler, a UFO researcher, received a package from Canada.

Inside the package included secret military documents, pictures, a map, and a videotape, labeled Guardian, with a fingerprint on it, showed the UFO that Diane had seen.

The map directed Oechsler to West Carleton, where he and another UFO, researcher Graham Lightfoot, interviewed Diane and found that her sighting matched the UFO on the video.

A navy physicist believes that the video is not a hoax and believes that Guardian stumbled onto the site accidentally. The physicist found that the UFO had to be 20' to 30' in length, which, according to Oechsler, is too large to be a hoax. The audio analysis of the tape only had the sound of dogs barking, probably Diane's dogs, and the craft appeared to be silent.

A NASA specialist reviewed the tape and could not determine what the craft actually was.

After the incident, helicopters of black, green, or maroon color were seen throughout the West Carleton area, although the military denies that the helicopters were theirs. Oechsler believes that the key to finding out what the craft really was is the mysterious individual named Guardian.

However, the documents found along with the videotape seem to cause Guardian to lose credibility, as they appeared to be about UFOs, Red China, and nuclear weapons, and that the papers appeared to be forged. Also, Oechsler found that on the video there were images of what Guardian claimed was an alien being, although it appeared to be someone in a mask.

However, many still believe that the video of UFO is real, despite the questionable items that were with it. Many are certain that if Guardian could be found, the mystery could be explained.