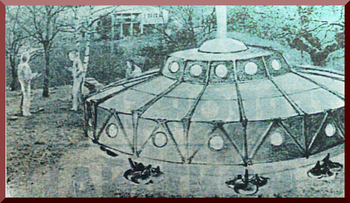 Witnesses said today they thought they had seen human figures in a flying saucer.

They saw the figures through portholes in the saucer they said. 6 people reported having seen a pear shaped, green object over East Malvern and Carnegie at 12:40 a.m.

I was saying goodbye to friends when I heard a noise like the dial tone in a telephone. I saw an oval shaped object about the size of a railway carriage travelling in a curved arc from north to south. It travelled at a fantastic speed, yet appeared to be moving slowly, as if time and speed had become distorted.

It gave out a weird orange light. When the shape reached the lowest point in the arc, I could definitely see in the object vague shapes that looked like human busts. The aircraft looked as if it were made of glass. You could see into but no entirely through it. Yellow vapor or flame came from it. The machine accelerated, and in another second or so it disappeared.

It was not frightening just terrifically interesting.

I have always been skeptical about flying saucers but now I think there might be something in the theory.

It was 50 yards away and within 50' or 60' from the ground. One moment it was there before me, and the next it was gone, shooting out yellow flames from the sides and underneath. Through what looked like portholes or windows there were reflections of some sort which resembled people.

I have seen our fastest fighter planes but this thing moved with indescribable speed, if it was a flying saucer from another planet we’ll need faster planes if we ever have to fight the Martians or whoever they are.

It disappeared with a tremendous, roaring sound.

A yellow flame spurted from the back like a Buck Rogers rocket ship. There seemed to be people vaguely shadowed in the strange light the machine emitted.

Its shape was a cross between an egg and a plate. It appeared about 40' or 50' above the ground. There were yellowish flames.

A woman schoolteacher who would not give her name, said:

The thing was pear shaped, with a beam of light extending from the blunt end. It was travelling low and fast.

A constable, on his way home form police Headquarters, said:

An oval shaped machine sped from the sky and hovered low, about 60' above the ground. Scarlet flames were shooting from it. Shadows of some people, I think, could be seen for several seconds.