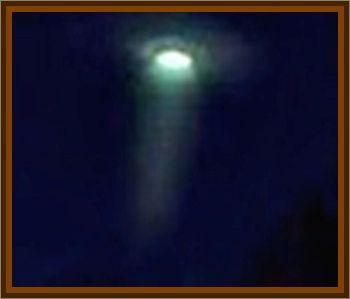 The scene was so strange that made some to wonder if it was a wormhole or portal in the sky from another dimension. One witness said that the mass sighting was all over social media sites, and many people posted about a green glowing disk above South Africa.

The bright disk was spotted at the Cape of Good Hope, above Cape Town. In the image that one witness has made, a disk shape can be seen with glowing bottom center. The poster claimed that it was the same UFO he spotted three years ago. He claimed to have discovered it on Google Earth map, but Google deleted it from their map after he made a video and reported it on his site.

He said: This UFO today, looks like the same craft. The green UFO appears the same month when many UFO shaped clouds were pictured over Cape Town.

A social media user said: First it was those clouds, and now green orbs are seen floating around Cape Town.

Other social media users also posted about a UFO or green lights seen in Cape Town, wondered if it was real, and asked if others also saw it.

Around the same time of these sightings, a 3.9 earthquake also hit the entire West Coast of South Africa, reported from the Koeberg Nuclear Power Station area north of Melkbosstrand all the way down to Tulbagh, that earth tremor was felt. Earthquakes often are accompanied by sightings of gas emissions and ball lighting.