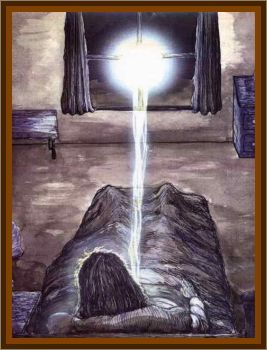 I left Ross River, and headed up the North Canol Road by myself on my motor bike for moose. I was planning on spending 3 days in the area between Sheldon Lake and Macpass. A guy I worked with and a friend of his were to leave a day later and I was to meet them for some fishing. We were all to stay at a trailer at Dewhurst Creek.

I left Ross River early in the morning and the temperature started to drop. Then it started to rain very hard and very cold. When I got to Gravel Creek, I stopped at Art John's Cabin and put on extra clothes while standing under the edge of his roof. I knew the rain would not stop, so I got back on my bike and headed off. I arrived at the trailer ½ hour before dark, very cold and very tired. I lit up a fire, cooked supper and went straight to bed looking forward to the morning hunt. Over night the rain had stopped.

At daybreak I put my gear and my gun on my bike and headed towards Macpass. A couple of miles down the road, I was putting along at about 10 M.P.H. looking into the trees and watching the hillsides. I decided to stop for a pee. I stopped where I could see some mountainsides and some valleys. I parked on the right side of the road. The sun was shining, the air was perfectly still and a bit cool.

I was standing just in front of my bike watching the mountains to the south, when I noticed to the left out of the corner of my eye, what I first thought was an airplane. It was 400 - 500 yards away and about the size of a DC-3 plane or a full-size school bus. It was traveling north to south, at about 40 yards above ground and moving maybe 20 M.P.H. Right away I thought boy is he low. I blinked my eyes because I couldn't make out any tail fin or wings.

It had what looked like portholes all along the side of it. It was cigar shaped with a grey strip down the middle and a dark green on top and bottom.I thought to myself, something's wrong with this picture, then I realised there was no sound! If it was an airplane, the roar would have filled the valley.

As I watched, it seemed to partially dematerialize and then return to solid form, it did this as it was moving, a couple of times. Then it dawned on me, oh-oh, I don't think I should be seeing this, it's a UFO and probably doesn't want to be seen! I crouched down on the road, hiding behind the roadside grass. I then watched it go behind a cone-shaped hill and not come out. I stood up looking for it and feeling very excited and happy about what I saw and thinking they didn't even know they were being watched.

I was standing beside my bike when I heard a loud metallic clunk behind me around the corner. Right away I thought, somebody must be here and I've got to tell them what I saw. The noise I heard sounded like a heavy trunk lid on a car slamming shut. I quickly walked along the edge of the road to the corner to see who was there. I came face to face 60' with 2 grey creatures in blue jump suits, about 5' tall with big insect looking heads, pointy faces, big eyes, thin arms, body and legs. I immediately thought they're not little green men, they're grasshopper people. Before this, all I knew about aliens was that they were supposed to be little green men.

At that same instant, the one on the left raised his left hand to his waist, which held some type of flashlight device and I saw a bright flash of light come from it. I instantly felt paralyzed and was convinced time had stopped, everything was black, no sound. I tried to yell "No!" but all that came out was a distorted grunt. Next thing I knew I was standing on the side of the road scared, shaking and confused.

Within seconds I remembered all of this that had just taken place and I thought, I'm getting out of here before they get me again. I turned around to get my bike and for some reason it was not there, then I noticed it was on the other side of the road. I said to myself, what the hell is this? I didn't put it there. Still panicking I rushed over and got on it and realized the keys were gone. I always left the keys in it, that way I could not lose them while sneaking around in the bush. I immediately started looking down the road and suddenly saw them in my hand. I started my bike and raced back to the trailer.

I was feeling scared and amazed at the same time and then noticed that all the shadows of the trees were pointing in a different direction than that of the morning sun. About 15 minutes later I was at the trailer. Half an hour later it was dark. I thought no way, I only left here an hour ago, what's going on? I was really confused then, I said to myself, I'm not telling anybody about this, I'll just forget the whole thing.

I put on a pot of coffee and could then hear a soft humming sound above the trailer. I could also feel a soft vibration in everything trailer, air, etc. After about 10 minutes it had all stopped. I had a very strong feeling that they were outside. I did not look out the windows.

Later that night I still couldn't sleep and while having my coffee I began to have flashbacks of the past events. I remember being in a dream-like state watching scenery flash by underneath as if I was flying. I watched mountains and rivers and forests go by at a very high rate of speed. I then became aware of other sounds and seemed to wake up. I opened my eyes and could see nothing but black, very deep and inky black. As I was looking at this, the blackness pulled back, revealing a face, I had been looking into the eyes of a grey type creature. I could hear in my mind a voice saying there is nothing to worry about. I could hear him talking in my mind.

There were 3 or 4 of these types walking around, but only one talked to me. The two I saw earlier on the road, I never saw again. I then sat up and had an idea of what might be going on and I asked, Are you going to do experiments on me? and the one said, They've already been done. I felt really good then because, except for a strange sensation in my hands everything felt normal. I kept rubbing my hands together but did not look at them, as there was a totally strange environment to look at instead. I experienced no discomfort. The being nearest me asked if I would like to see my home planet and I said sure. I then walked over to the window, where there was a machine that looked like a big copy machine. He asked me not to touch it, I replied Don't worry, I'm not touching anything in here.

He then said, that bright white star is your home. I didn't know anything about astronomy at the time, but I always thought earth was blue, so right away I thought he's lying. He also explained to me about space and stars etc. but I can't remember any of it now. I was also asked if I would like to go on a trip. I replied Not yet, I felt very honored to be asked and I did want to go, but felt that the time was not right.

Then I was told I would have to forget all of this. I was disappointed at hearing this. The first part of the experience was very scary, but once I was with them, I found them to be friendly, helpful and their looks didn't bother me. They actually seemed like old friends. They gave me a clear glass, ¾ full with a yellow liquid and said to drink it up, it would make me forget everything. I told them, I did not want to forget an experience like this. It should be remembered! I was told it was for my own good that I forget. So I took 3 little sips and put the glass down. Next thing I know, I'm on the road by my bike, scared to death and wanting to get out of there. The next day I met up with the other two guys and never said anything to them.

1) When the being shot me with the flashlight device, I experienced what they call the cone of silence. It seemed like time stood still and nothing existed but me, like I was pulled from reality. It was the most absolute quiet ever imagined. I was really scared and tried to yell No!, but all that came out was a gnarly growl. Everything went dark and I had the sensation of hurling skyward at a terrific speed. I also felt that I was being stretched, as if my feet were on the ground and my upper body was 20' above. My whole body shooting skyward.

2) When I was watching the UFO move slowly in front of me, I thought, I better get a picture of this. My camera was just inside my jacket in my shirt pocket and was very quick and easy to get at. A sort of calming feeling came over me and I felt like, It's no big deal, don't worry about it, I don't have to have a picture. Afterwards I thought, what bizarre behavior. I kept 2 cameras on the go all the time and I was always on the lookout for photo opportunities. To think a UFO photo is not important is insane.

3) While driving from Ross River to the trailer, I had a feeling that something unusual might happen, but never expected this.

4) Before this incident happened, I had no interest or knowledge about any of this. So one day I decided to write everything down that I could think of.

5) Although I wanted to tell people about this, I was very reluctant to tell this story. Since it happened, I have told it to less than 10 people. Every time I tell someone, I feel like I just broke a promise I made to them that I wouldn't tell anybody. This feeling may just be me or it may be programmed into me to keep me quiet. I don't know. I decided to tell it as more of an awareness thing. I'm sure other people have had experiences but are held back.

6) When I got back to Ross River, I was thinking about the sensation in my hands when I sat up on the bed. I looked down at my palms and was startled to see a scoop mark in the palm of each hand. I had not seen these before. Over the next couple of years, I asked two doctors and four nurses if they knew what this was and they all said no, they had never seen anything like it before. In September 2000, I asked my doctor about it and he said yes he knows of it and he told me the name of it.