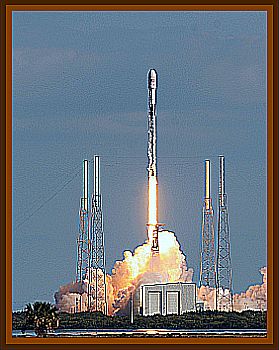 During a U.S. Navy Polaris rocket test launched from the ground facility, a UFO temporarily disrupted the tracking system.

Clark McClelland viewed the object through 10x50 binoculars. The UFO was a disk about 20' to 25' in diameter and 6' to 8' thick at the center.

Proof that an unidentified flying object disrupted Air Force tracking of a rocket, earlier this year, has just been received by NICAP. Similar reports had been received previously, but this is the first to be fully documented. In this officially recorded case, the UFO suddenly appeared above an Air Force test range after a rocket had been fired.

Officials reported it was such a strong radar target, evidently larger than the rocket, that the automatic tracking system immediately switched to the UFO.

For over 10 minutes, Air Force radar tracked the unknown flying object as it alternately hovered and moved rapidly above the range.

Later calibration showed no radar malfunction, the UFO was definitely a solid object, seemingly operating under control. From the recorded evidence it appears the UFO approached swiftly from one side as the rocket was fired, or else it descended quickly from a high altitude.

Whether its appearance was labeled a coincidence or an observation of the rocket test is not shown in the record.

Though no military security is involved, this significant report has been withheld from the press for several months, either at the base or by Air Force Headquarters.