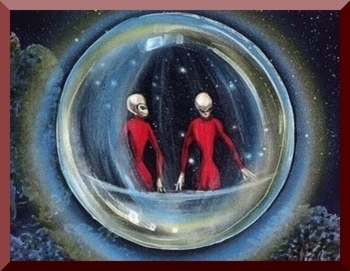 One bizarre report of unusual phenomena occurred in 1976 in the Spanish Canary Islands. The case features a most extraordinary description of aliens & their craft, the event is extremely reliable in that it includes multiple witness reports which agreed in all aspects.

It began on the night of June 22, as residents of Tenerife, La Palma, & La Gomera began reporting the sighting of unusual lights in the sky. These lights and their maneuvers were different from anything residents of the area had ever seen. Newspaper headlines the next morning proclaimed that thousands of people witnessed a spectacular phenomena which lasted 20 minutes. The most sensational aspect was the sighting of the sphere was occupied by alien beings.

Three days later, the Commanding General of the Canary Island Air Zone named an Investigative Adjutant to make sense of the events. His findings were forwarded by a Spanish Air Force General to journalist J.J. Benitez in 1976, and the details of the case quickly reached beyond the scope of the Islands to the outside world. Benitez's investigation would be the basis of his book. The case would regain momentum in 1994, when files of the investigation were released as part of the unveiling of Spanish records, a type of Freedom of Information act. The 1976 report was massive, containing over 100 pages of testimony, evaluations, drawings, & more.

The official Air Force report of the incident was headlined by depositions of 14 witnesses. A type of standard was established with witness reliability based on social status. A doctor's report was considered a high priority, whereas a common laborer's report was given little, if any, weight. In this particular case, this unfair standard did not take away from the acceptance of the facts, since all involved were in full agreement as to what they saw. The report was very detailed, and presented chronologically.

The initial report of the Canary Island UFO came from the Navy's armed escort ship, Atrevida. The ship was located off the coast of Fuerteventura Island. The ships captain gave a detailed report of what he and his crew observed at 9:27 p.m. on June 22. The entire crew saw an extremely bright yellow-blue light moving from the shore in the direction of the ship, located 3½ miles at sea. Several of the crewmen at first thought they were seeing a conventional aircraft with its landing lights on. The lights soon faded, and a type of beam began to rotate, similar to a lighthouse effect. Afterwards, an intense halo of yellow & blue could be seen from the craft. Amazingly, the crew watched the craft for a full 40 minutes. The craft seemed to be playing tricks with its lights, as they constantly changed from one form to another. Even though the light show was observed for a long period of time, no signature was evident on the ship's radar of any flying craft.