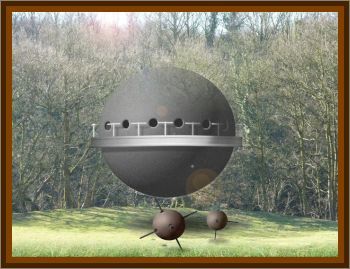 John A. Doe was fishing a river about 400 yards from his home when he saw an unusual craft land a few hundred feet away. His dog became very nervous and began to howl. Having his gun, which was equipped with a telescopic sight along with him, John employed it and was able to notice two spheres of different sizes, the smaller one rotating around the other. The larger object was not on the ground but was hovering about 6' above ground, and three balls appeared affixed to the underside of it.

Shortly, movement was detected and a few moments later, three entities came down to the ground. They appeared human but quite small, agile, and their movements were very rapid. One had a kind of phosphorescent basket in his hand and another entity had a metallic tube which was coneshaped on one end.

A large amount of the chalky material on the edge of the river was collected in the basket and taken inside the craft. Then the two entities came back to the same spot and, again apparently using the tube, extracted the same material from the ground.

The tube was pointed at the ground and the material was sucked up into it.

When they were seemingly finished with the latter task, the three little men got into the object, which then took off at high speed.

After the object left, John went to the spot where the three little creatures had busied themselves and found square holes had apparently been made in the ground by the cone shaped instrument. A few days later, John learned of the existence of similar holes in the same general area.

These holes were so large that they could have accommodated the entire body of a man.