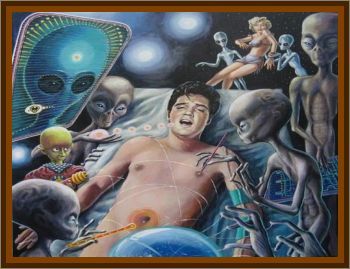 It was about 10:00 p.m., I was out camping & fishing with my son who, at the time was only 14 years old. It was getting to dark to really see what we were doing even though we did have some source of light, an electric lantern and a flashlight, and a fire that was off at the campsite. We were packing up and getting ready to take our fishing gear back to the tent when I heard a whistling sound. Steven took the gear and offered to head back while I tied up the boat.

The whistling continued for a good long time, eventually I looked up and I saw a very bright star in the sky that was almost a blue color. I looked away from it for a second and when I looked back it had moved directly above me. I thought perhaps it was a plane and finished tying up the boat to the dock.

Then I felt the air around me freeze, but it wasn't cold, it was like being suspended in still water unable to move or feel anything else. I blacked out not exactly knowing why until I woke up in a very dark room on a table that was set at a 45° angle. I looked around and realized that I was tied down. After a few minutes of panic a very tall thin figure walked into the room. It had a glowing pendant looking thing in its hand that was about the size of a dime. It had a faint almost baby blue light that came from it. The figure had a large head and big black almond shaped eyes. Its arms and fingers (all I could see of it by this time) were abnormally long and thin. It put the pendant over me so that all I could see was the light. Suddenly I felt a white hot pain in my abdomen but I couldn't move and I couldn't say or do anything at all. Again I blacked out.

I woke up laying on the ground about a mile from the docks not knowing for sure what had just happened. I pulled up my shirt to see that there was a thin white scar where my ribs meet on the lowest point. I felt it and it felt as though there was a rock in my skin but it didn't move at all. I went to the doctor a week later for scans. They don't know what it is exactly but they do know that it is a round chip of some kind. Sadly because of its placing they can't remove it without removing my lowest rib on my left side as well. I have it scheduled for July 20th. I don't want them tracking me which is what I am convinced is what they are doing.