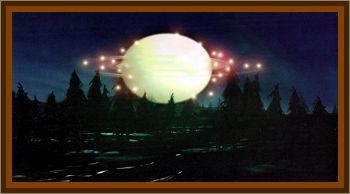 Mr. and Mrs. Campbell and their 4 children had just left a movie theatre in Spartanburg and were heading up Byrnes Boulevard to go home, in Inman, when they spotted the object in the west. They said it was much too large for a star and the light was too massive to be an airplane. It appeared to be nearing town and getting larger. Mr. Campbell described the mysterious thing as a glowing ball of fluorescent blue, red, and silver light.

The Campbells were not too concerned with the object until it swung right and followed them up the Asheville Highway, hovering over the trees along the way and keeping pace with the car. Campbell stopped the car at a shop just before the entrance to the Riverdale subdivision where they lived, bought some ice cream for the children, and was surprised to see the object stop over a field across the road. When he came out of the store with the ice cream, it was still there.

It was just hovering less than 50' off the ground and just sort of rocking back and forth gently, he said.

At this point, Mrs. Campbell was frightened, and when Willie, Mr. Campbell, decided to go up the highway past I-26, she protested, but he was curious, and they drove on. When they stopped to turn around, the object stopped, and when he headed for home, it followed. When he pulled the car into the driveway, the object stopped about 200 to 300 yards away, hovering between two houses, just below the rooftops.

Meanwhile, Mrs. Campbell ran into the house. Mr. Campbell stayed outside watching it. Then, his four children, wife, and mother in law came out and watched for another 15 minutes. The object did nothing, just hung in place while they watched it. Next, Mr. Campbell and his son, Scottie, age 12, got into the car and played tag with the globe. It followed them almost to Campton Heights, where Willie stopped and turned off the headlights.

At that point, the sphere swung in front of their car and went up much higher and further away. The two watched it for about 15 minutes more, then returned to Inman.

The object followed them part of the way back home, but by the time they arrived at home, it was gone. They stood in the yard 10 - 15 minutes more to see if it would come back, and all of a sudden, it showed up. It came over the house at about 500' altitude, let off a blue and silver streamer like a jet, which was 15' or 20' long, in their estimation.

After that, Campbell said, it just disappeared and we never did see anything.

When interviewed, Mr. Campbell said: I really don’t believe that I could sketch what I saw that night. It was spherical in shape and had a glow to it. Toward the inside, I could make out the colors red, blue, and silverish, but they blended into each other, so it would be hard for me to say one area was one color and another area another color. The lights appeared to me to be sort of pulsating. From where I was, it, the light, appeared to be maybe 20" to 25" inches in diameter. I guess that the distance was probably about 150 to 200 yards at the closest point from me. The last time my son and I saw it was after we got back home the second time. There was no noise from it at all. As low as it was, I know I would have heard something if it had been an airplane.