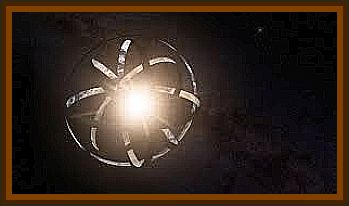 When I was around eight years old, I observed a sphere of light, about 40' in size, floating 10' above the houses in the other housing scheme, that was visible from my bedroom window about 750' away, it just sat there pulsing, like a street light will do with a certain type of rain falling past it, so slight but the pulse was visiable just the same.

After a while, 5 minutes, it seemed to get smaller but denser, more vibrant, as it was doing this it rolled over the roof and down to the park that divided my scheme with the one where it appeared. A ball of light about 20' in circumference bouncing about. The more it bounced, thrumbed, vibrated, the more light,energetic and animated it became. It seemed like it took about 20 minutes to gain its peak.

Its colors were a fire red flickering like as in a fire, within a peachy colored sphere. Every now and then you would hear a pop like something. I noticed smaller, about 2' and dimmer spheres drop down through the big spheres circumferance, like tailless sperm entering an egg, the color would change slightly, looking less strong in color, then some of the flamelike streaks changed to a fire yellow, and as more yellow than red were visiable, colored sparks began resounding, they sounded like distant fire crackers within the sphere. It was like they were being sparked off in the color sequence of the rainbow, there was method to this sequence.

I just remember it looked like an invisible gyroscope with colored halogen light strapped to it being spun in all manner of directions but with a pattern and going that fast that the tracers start to look like solid lines, creating patterns that resemble spirograph or many a crop circle, each color individually forming its own pattern and after completion it looked like they dropped into a vortex just lower of center, as it went through the rainbow sequence,

I feared I would not stay awake long enough to see the purple, my favourite color, it started of as the palest lilac and ended its sequence purple neon, the green sequence seemed very urgent,as if it was in a hurry to get it over with, still the yellow flamed streaks of color within the sphere were getting whiter, as the green sequence finished the whiteness level got to what could be described as, as bright as a halogen bulb, as you are staring right into it.

At this point it lifted about 6' from the ground and disappeared vertically along the side of a hill and up into the air, it was cloaking itself as it moved, by the time it got over the Bonnybridge Road, high enough for me to see it again.

I followed it skyward, where I saw were three stationary black bat shaped ships waiting for it,by this time my UFO looked like a cresent moon. They were there and gone in the blink of an eye. IN a blink of Halogen light. I fell asleep immediately afterwards and woke up to a rollicking for moving the linen box over to the window I was moved back into the front room because I wouldn't stay away from the window.