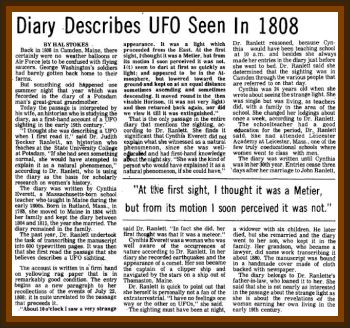 Back in 1808 in Camden, Maine, there certainly were no weather balloons or Air Force jets to be confused with flying saucers.

George Washington’s soldiers had barely gotten back home to their farms. But something odd happened one summer night that year which was recorded in the diary of a Potsdam man’s great grandmother.

Today the passage is interpreted by his wife, a historian who is studying the diary, as a first hand account of a UFO sighting in the early 19th century.

I thought she was describing a UFO when I first read it,said Dr. Judith Becker Ranlett, an historian who teaches at the State University College at Potsdam.

If she had seen something normal, she would have attempted to explain it as a natural phenomenon, according to Dr. Ranlett, who is using the diary as the basis for scholarly research on women’s history.

The diary was written by Cynthia Everett, a Massachusetts born school teacher who taught in Maine during the early 1800s. Born in Rutland, MA., in 1785, she moved to Maine in 1804 with her family and kept the diary between 1804 and 1815, the year she married. The diary remained in the family.

The past year, Dr. Ranlett undertook the task of transcribing the manuscript into 600 typewritten pages. It was then that she first read the passage that she believes describes a UFO sighting.

The account is written in a firm hand on yellowing rag paper that is in remarkably good condition. The entry begins as a new paragraph to her recollections of the events of July 22, 1808, it is quite unrelated to the passage that proceeds it.

About 10:00 p.m. I saw a very strange appearance. It was a light which proceeded from the East. At the first sight, I thought it was a meteor, but from its motion I soon perceived it was not.

It seemed to dart at first as quickly as light, and appeared to be in the atmosphere, but lowered toward the ground and kept on at an equal distance sometimes ascending and sometimes descending.

It moved around in the then visable horizon, it was not very light, and then returned back again, nor did we view it till it was extinguished.

That is the only passage in the entire diary that mentions the sighting, according to Dr. Ranlett.

She finds it significant that Cynthia Everett did not explain what she witnessed as a natural phenomenon, since she was well educated and had first hand knowledge about the night sky.

She was the kind of person who would have explained it as a natural phenomenon, if she could have, in fact she did, her first thought was that it was a meteor, said Dr. Ranlett.

Cynthia Everett was a woman who was well aware of the occurrences of nature according to Dr. Ranlett. In her diary she recorded earthquakes and the appearance of a comet. Her son became the captain of a clipper ship and navigated by the stars on a ship out of Thomaston, ME.

Dr. Ranlett is quick to point out that she herself is personally not a fan of the extraterrestrial. I have no feelings one way or the other on UFOs, she said.

The sighting must have been at night, Dr. Ranlett reasoned, because Cynthia would have been teaching school at 10:00 a.m. and besides she always made her entries in the diary just before she went to bed.

Dr. Ranlett said she determined that the sighting was in Camden through the various people that are referred to on that day.

Cynthia was 24 years old when she wrote about seeing the strange light. She was single but was living, as teachers did, with a family in the area of the school. She changed her lodgings about once a week, according to Dr. Ranlett.

The schoolteacher had a good education for the period, Dr. Ranlett said. She had attended Leicester Academy at Leicester, MA., one of the few truly coeducational schools where women went to class with men.

The diary was written until Cynthia was in her 30s. Entries cease 3 days after her marriage to John Ranlett, a widower with 6 children. He later died, but she remarried and the diary went to her son, who kept it in the family.

Her grandson, who became a lawyer, did some work transcribing it about 1880. The manuscript was bound in a handmade cover made of cloth backed with newspaper.

The diary belongs to Dr. Ranlett’s father in law, who loaned it to her. She said that she is not nearly as interested in the passage about the strange light as she is about the revelations of the woman earning her own living in the early 19th century.