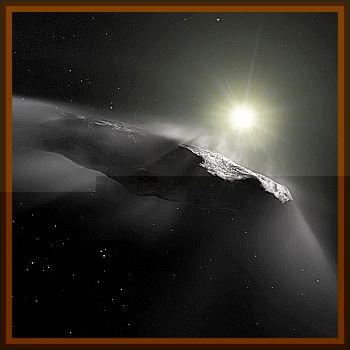 A man identified as Vicenzo Dattilo, aged 67, a lawyer/journalist/writer/poet, was praying before the main convent when he saw a star descending from the sky while it spun very rapidly.

The object flew horizontally to and fro for some time, and then stopped at approximately 300' over the witness's head. Subsequently the star descended vertically and landed smoothly and silently, at a distance of some 60' from Dattilo.

The intense illumination surrounding the object extinguished and the witness observed a large, 30' wide saucer. The object had 2 domes at its center, one above and the other underneath. The upper dome possessed 2 long and thin antennae which moved slightly as if from the wind. The object appeared to be positioned a bit above the ground while not coming into contact with it. Then, an oval hatch opened in the lower dome and a small creature emerged. The witness glimpsed another creature in the lower, transparent dome.

This second being was seated and appeared fluffed up and ruffled like a doll. The first creature approached the witness and made a gesture as if to say:

Stay where you are do not move.

It stopped at a distance of about 12' to 15" from Dattilo, and both he and the creature made eye contact with each other. The being stood approximately 3' in height and was dressed in a transparent outfit which emitted a bluish colored light.

This spacesuit seemed impermeable to anything coming into contact with it from the outside. The creature began to speak by emitting some guttural sounds. At first Dattilo didn’t understand a word, but then, his linguistic knowledge led him to comprehend the source of the being’s speech.

After some attempts, Dattilo and the creature finally managed to converse in Old Latin, although they made many mistakes. The creature claimed, also by using some gestures whereby it pointed to itself as well as the saucer, to be of this world, from a country where science had developed much during the last number of years. This nation’s craft were reportedly powered by enormously gigantic natural forces, a revolutionary discovery able to render any other aircraft or weapon obsolete, and to introduce the peace of heaven to the entire world.

Dattilo inquired of the creature the reason why these saucers were piloted solely by beings short in stature. The being’s response had to do with the continuing development of the craft, this was not perfect, the creature’s made some gestures and jumped about a 18" off the ground, remaining stationary in mid air.

Dattilo reported that in the country where the saucer was built, he refused to divulge the name of this nation, little men are highly esteemed and specially trained to become saucer pilots.

The creature glanced around, and Dattilo spoke to it in some words of Latin. In response, the being offered a greeting with its hand and then turned toward the object. The creature entered the object’s transparent cabin through the open hatch, aided by some external force. It took a seat beside the other being, which had its hands on a type of steering wheel mechanism. This other creature sported several small, bright flashing lights on its face. The object illuminated and thereafter took off vertically, producing a slight rumbling sound. Once the object had attained a certain altitude, it flew back and forth horizontally while continuing its spinning.

Subsequently the object departed at great velocity and disappeared from sight.