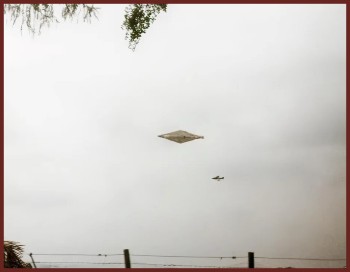 A 75' wide diamond object was tailed by an RAF Harrier 20 miles north of Pitlochry in Scotland. It appeared to hover for 10 minutes above the A9 near Calvine. It then shot off up into the sky. An unnamed photographer took a series of photographs and sent them to the Daily Record newspaper. They in turn sent them to the Ministry of Defense, for comment, before running a report on the subject. The story was never run by the Daily Record for reasons unknown.

The MoD, on the other hand, treated this very seriously. A defensive press line was prepared for expected questions from the mainstream media. The media strangely never asked any, this can be read in DEFE 31/179/1: pages 157-8 via the National Archives. The briefings state that enquiries had failed to identify the RAF Harriers shown on the photograph. All MoD records suggested none were airborne at the time.

An official wrote in a memo:

Such stories are not normally drawn to the attention of ministers, and the MoD press office invariably responds to questions along well established lines emphasizing our limited interest in the UFO phenomenon and explaining that we therefore do not have the resources to undertake any in-depth investigations into particular sightings.

The memo noted there was no record of Harriers operating in the area at the time and suggested the media should be told no definite conclusions reached regarding large diamond shaped object. The files contain blurry photocopies of two of the pictures next to aviation journal reports about a secret triangular shaped stealth aircraft said to have been developed by the USAF. And in late 1991 the MoD apparently commissioned line drawings of the UFO, noting that the sensitivity of (the) material suggests very special handling.

The original photographs appear to have gone missing and the identity of the photographer is now a mystery. A question was asked in Parliament in 1996 about the location of this photograph, and the matter was also raised in a Freedom of Information Act request.

Nick Pope who was appointed as head of the UFO desk for the MoD the year after the incident occurred has said:

I first came across this story in 1991, when I joined the UFO project. A poster sized enlargement of the best photo was prominently displayed on the office wall. I worked in a four person office my predecessor had put it up. It was one of the few visible UFO related items on display; most stuff was locked away….. Sometimes, people would come to our office. You’d have this surreal moment when they’d stop midsentence, stare at it, point and say “what the hell’s that?” This was up close and personal, reach out and you can touch it stuff. “I don’t know what it is, but it’s not one of ours” was our stock answer to the inevitable question. The X-Files first aired in the UK in 1994 and I acquired the same nickname (Spooky) as Fox Mulder, for obvious reasons. Mulder famously had his “I want to believe” UFO poster on his office wall and though uncaptioned, I suppose this was my equivalent. Word got around and people would swing by to take a look, even when they had no obvious business in our section.

I asked my DIS opposite number about the image. I was told that the official assessment was that the photos were real and the craft had a diameter of around 25 metres (over 80'). At one particularly surreal briefing on the UFO phenomenon my DIS opposite number indicated the photo and pointed his finger to the right: “It’s not the Americans”, he said, before pointing to the left and saying “and it’s not the Russians”. There was a pause, before he concluded “and that only leaves …” - his voice trailed off and he didn’t complete the sentence, but his finger was pointing directly upwards.

Despite this sensational conclusion, MoD documents show that if the media asked, the line to take on this was to be that no definite conclusion had been reached regarding the large diamond-shaped object. At some point in 1994 my Head of Division had somehow convinced himself that the craft was a secret, prototype aircraft or drone, probably American. But in response to repeated sightings of triangular shaped UFOs capable of hovering and then accelerating away rapidly at high Mach speeds, we’d just received assurances from the appropriate US authorities that the US wasn’t testing anything like this over the UK. On the basis of these assurances,

Defense Ministers had assured Parliament that no such aircraft/drones were being flown. Perhaps my Head of Division thought this was a lie and thought he was being loyal when one day he took the photo away and locked it in his desk drawer. On the other hand, he was probably the one who drafted the Parliamentary assurances, so maybe he was just covering his back. What happened next? The suspicion was that someone had shredded the photo, but whatever the truth of the matter, it was never seen again. The same thing had happened with some Defence Intelligence

Staff files on the The Rendlesham Forest UFO Incident …and I was in the same position again: I think some people thought I’d put all this stuff through the shredder myself, but I promise I didn’t.

Unfortunately, here we have yet another of those long familiar tales of evidence suddenly missing before it is made public. Can we blame incompetence in the MoD? Or is something more suspicious to blame?

The original photograph has been seen by a handful of people. The copy in the National Archives looks like a 5th generation photocopy. Rumours at the time were of a top secret Aurora Aircraft being tested. The Aurora has still not been proven to exist.