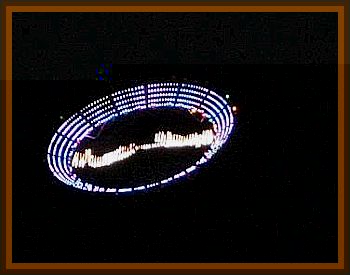 At around 11:00 p.m. I was working with my partner patrolling the south west part of the city of Calgary. A call came in on the north west side of the city, which was in a separate district of the city in which we where working, however we shared the same radio channel.

The call was that there was several unidentified objects flying over the north west part of the city, at this time only a couple of calls had come in and my partner and I thought nothing of it at the time and the comments on the radio of the north west units on patrol, more or less joked about the call.

But within the next hour our communications section began to get a flood of calls coming into our main dispatch section of the same type of call, several unidentified craft in the northwest part of the sky, just sitting there.

At this time my partner and I decided to check it out by driving to an open field on the south west part of the city which was elevated and had a good view of the city from the west. A northwest car was dispatched to the call. Shortly upon our arrival to our view point, I along with my partner could see one object directly north of our position, placing it in the far west of the city’s north end about 3 miles north of us.

A second object could be seen east of the first above the north center of the city, this object was the same design of the first over the northwest of the city. Both of these objects where hovering over the city, I would estimate at least 1,500' above the ground and from our vantage point we could see a bright white light in the center of the craft and a blue light on top rotating in one direction as though it was mounted on the out side of a saucer and the saucer was spinning, there was a red light on the bottom this was a red light and moved in the opposite direction of the blue light that was mounted on the top. The blue light was mounted in the same way as the red light, as though it was on the end of a sauce. Looking further east and north of the city another object could be similar, however this object was estimated to be at least 5 to 7 miles away.

All the object where of the same configuration.

Shortly after our arrival, the unit in the north stated over the radio channel that a citizen had lent him a pair of binoculars, and he stated that the craft was saucer shaped with blue light on the top and a red light on the bottom. The northwest unit then turned on his over head emergency equipment, patrol car lights, red/blue. It was at this moment that we saw the object in the northwest bounce up and down several time, faster than any craft that I have ever seen, dropping altitude about 500' in seconds and bouncing back to its original position. Our communications section contacted the military base which was in the city at the time, and two MP’s in a vehicle attended our location.

The airport was contacted by our communications personnel and we where informed that the airport could not see anything and had nothing on radar. The airport is located in the northeast corner of the city and had a view of the entire city from the north east. Upon arrival of the MP, military police, the witnesses the same objects. Within a short time the MP received a dispatch call from their dispatcher saying that Spokane Washington had just been in touch with Ottawa and they said that they knew what the objects where and not to worry about them. After an hour at the site, the object in the south west part of the city began to move west bound, slowly at first then turned faster in a split second to a blur as though it was traveling at warp speed and then it vanished.

The next day the story was debunked in the local newspapers, saying that the objects were stars in the sky and not UFOs.