Object Seen and Photographed Over Calgary 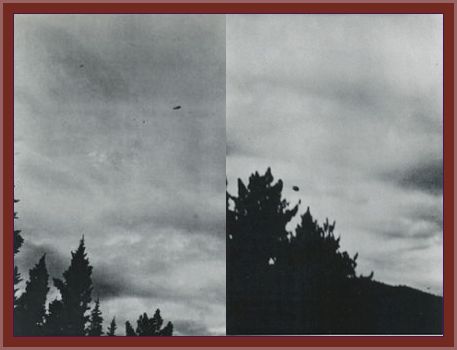 Of the 35 photographic cases examined by the Condon Committee, only 2 were judged to be first priority having potential value in establishing the existence of flying saucers.

One was the so called Calgary case with its 2 photos. Dr. Hynek, who subjected the original negatives to exhaustive lab tests, called the first photo the best daylight disk photograph I have personally investigated. 50 miles southwest of his home in Calgary, Alberta, Warren Smith and 2 friends were returning from a weekend prospecting trip through rugged bush country on July 3, 1967. At about 5:30 p.m. the youngest of the group pointed to what at first all thought was an airplane. It was some 2 miles away at about 2000', but losing altitude fast, as if headed for a crash. As it traveled toward them, they noticed it had no wings. It passed slightly out of view behind some trees, went Smith’s deposition, to which he swore under the Canada Evidence Act, then reappeared and hovered in the open sky, and something of a much smaller size fell from the craft.

In the 25 seconds the object was in view, Smith remember the loaded camera in his pack. I took 2 pictures of this strange craft and swear, no other humans were in that area and no camera trickery was involved, he stated.

The object was described as circular, shiny, and about 25' wide. Arrows point to a small cloud formation virtually unchanged in both photos, proof of Smith’s claim that the shots had been taken only seconds apart.

Hynek, who flew over the site with Smith, found no evidence of a hoax in his investigation.