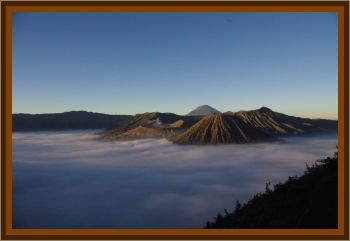 The UFOs reportedly landed on the Tengger caldera, a volcanic desert, that surrounded the Tengger mountain crater, East Java in 1964, In the same year the UFOs were launched in UFO.

The objects emit various colors and shine a beam towards Tengger people who are holding Kasada ceremony, which paralyzed them temporarily. The men were crossing the caldera toward the crater to throw the offerings on the full moon.

The incident instantly made the participants of the fearful ceremonies dead.

They thought the presence of the UFO was a bad sign and linked it to the previous disaster that had occurred in 1918 before a cholera outbreak, in 1948 before the Dutch military aggression, in 1957 before a rebellion outside Java, and before the G30S/Gestapu incident in 1965.