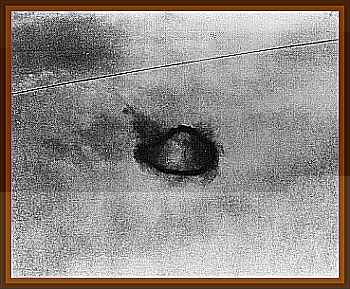 I have kept this a secret for almost 35 years, only telling family and occasional friend and thought it was time to disclose what we saw on a long deserted beach in a place far north of our state of Queensland called Cairns.

I was on holiday with my ex-husband up in Cairns and we decided to go to the beach for an hour or two. As there are many beaches up north and it was not a holiday season, we were the only ones on the beach that day. We laid out our towels to sunbath for awhile and when I laid down, I looked up to the sky to the left and I saw what I thought was a plane with the sun reflecting off it and paid no attention.

Approximately 10 minutes later I looked up again and it was still there and being a little bit surprised, I told my then partner, and we both watched it and it did not move. I started to get nervous and said to him that I was scared and that we should go, but my partner said not to be silly and that it was too far away and it couldn't harm us.

I then said well it can't be of this world and perhaps they were watching us and I wanted to leave, but he said for us just to watch it and see what happens, so we did even though I was scared.

We watch this ship that I originally thought was a plane for approximately one hour, and then it just shot off to the right and into the distance at incredible speed and disappeared.

I say that it was cigar shape, only because it was a fair distance away and at first I thought it was a plane, all I can say for sure is that it was long and silver and stayed in the one spot for a least an hour that we were there, so it could have been there for some time before we arrived and when it disappeared, it shot off at incredible speed.

I thought after all these years that I should tell someone, because at the time we didn't know who to report it to and thought that we would be ridiculed.