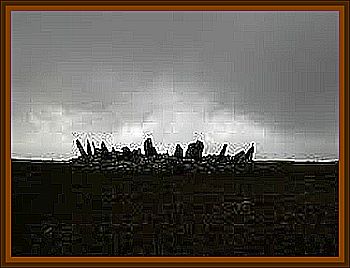 Back in 1974 I was 19 at the time and lived in a suburb of Cardiff Wales UK called Ely, and in the distance there was a woods called Caerau woods.

This evening I went out to my front pathway and looked around, it was a bit hazy but visability was about 2 miles. I looked up into the night sky and above the trees over Caerau Woods I saw what looked like 3 saucer shaped objects. As I had been taught in the scouts to look away from an object and then to return to the object, I did so, so it was not a trick of my eyes.

These 3 saucer objects were hovering above the trees they had like flashing lights/glistening lights around the ¼ part from the top of the object. Again I thought I was imagining it so I went inside and came back out, and they were still there hovering. I watched the 3, and then the first one in a pyramid type formation shot straight up at a speed like no other thing I have ever seen even to date, and then it disappeared. Likewise as did the other two objects leave in the same manner.

I enquired at Cardiff Wales Airport the next day as to whether there was any activity to do with the military or civil authorities in that area and they said that nothing was reported unusual on the radar screens that night. I contacted a police friend of mine and he enquired and there was no activity to do with them. And it was not kids with torchlights either as the spread of light would have been different.

I have never told anyone about this until recently because they might have thought I was a psychiatric case. But what I saw was real it was not a trick of light, it was not weather balloons or any other equivalent thing.