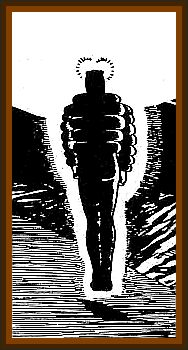 The information comes from Antonio Ribera, who was questioned by the witness during a UFO lecture Ribera gave in Jerez de la Frontera. Given the distance of the events from his home, Ribera passed the data on to Vicente-Juan Ballester and the Centra de Estudios Interplanetary Studies, which publishes Stendek.

Through this latter individual, the writer obtained knowledge of the event, and contacted the witness to undertake the investigation.

The incident occurred in May of 1960, the witness does not remember the exact date, at about 1:00 p.m. The encounter was at a crossroads between Arcos de la Frontera and El Bosque, both towns being in the province of Cadiz, not far from Jerez, where the witness lives. 3 miles from the site is the Embalse, Dam, de Bornos, and from there the road to Villa-martin branches off.

The witness was on a motorcycle, returning from Prado del Rey, also in the province of Cadiz, a town not far from the site of the incident.

There was not enough opportunity to get to know the witness well, but it should be stated that he is a mature man, a teacher, with an excellent predisposition to collaborate with the writer, to whom he provided all kinds of details.

Don Miguel Timermans Ceballos was motorcycling from Prado del Rey to Jerez, at the date and time indicated, when he discerned a strange human like being about 500' away, on a short steep uphill incline of the highway that was ahead of him. He describes the being as follows:

He was completely red, from head to foot, and suddenly appeared at the edge of the highway, rather tall, something like 6'-7' or more, having trouble walking, and his walking was like a mechanical doll, that is to say, like a robot, with stiff arms.

Timermans stopped his motorcycle, tremendously surprised, and got ready to observe better. The humanoid was walking on the edge of the road, and before going 6 steps, another individual of similar characteristics appeared, and followed him. Like his predecessor, he appeared suddenly.

The second humanoid was not so tall, as he measured about 4', and though he was also dressed in red, he had one difference with respect to his predecessor, he had a black boot. The witness does not remember if the boot was on the left foot or on the right one, but he certifies that he saw it like that.

Both humanoids then crossed the highway at an angle. Due to the fact that at that time, but not any more, this route was of white Earth, our driver perceived the red of their garments with all clarity, as well as the ringed outlines of the beings, with the classic shape of the Michelin man, which had been reported in Type I cases in different parts of the world.

Timermans decided to get closer, while he debated with himself over the danger entailed in his decision, so he again started up his vehicle. On reaching the curve in the highway to head toward the slope where the humanoids were located, they had disappeared in the same mysterious manner that they had appeared. The witness had taken a few short moments to arrive there, but the apparitions were no longer in sight.

The time of the observation from the first look, which we described, is some 30 seconds.

The witness told us that if there had been someone else with him, he would have proposed to get off his cycle to go looking for the beings in the vicinity, but as he was alone, he did not do it.

This is the account of what happened, an incident that closely resembles others, in different places of the world, France, United States, Reunion Island, and in our own country of Spain, apparently near Valencia. It is an event that due to its characteristics merits a high degree of trust.