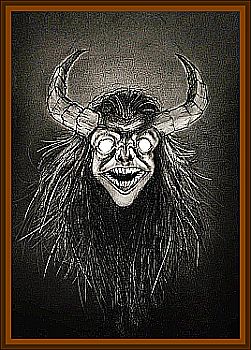 The Cabeça Satânica, Satanic head, also known as the cabeça errante, wandering head, is a disembodied demon head that bounces or rolls along the ground, grinning a grin of evil incarnate.

If you don't go insane from the sight alone, you will after the cabeça hops up and gives you a playful little bump, which, according to legend, is all it takes to render you swiftly sick and then dead.

Most often, the cabeça shows up as a long haired stranger in the woods at night, his back to the victim. That's not nearly creepy enough, though, so the stranger's body then drops straight down into the ground, and/or Hell, probably a lot like the stomach of the unfortunate witness.

It stops dropping at the neck, and only a shaggy cabeça remains to be seen.

Smiling like a lunatic, the head turns to face its prey.

There are minor variations of this legend, one of which describes the cabeça as a kind of horror-bomb lobbed by some other evil being, who throws it at any person in range to torment them for kicks and giggles.