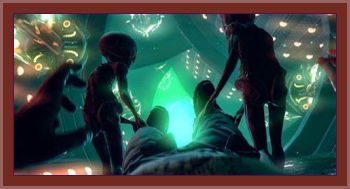 This is the story of my abduction described as accurately as I can remember it. The events are not in chronological order, but they follow the order in which I was able to bring them back to my conscious mind. Ever since I was a kid I have always been interested in reading science fiction. I was never interested in the abduction phenomenon because I thought, like most people, that it was crazy to believe for an advanced race with enough technology to do interstellar travel from so far away, possibly another star system, would upon reaching us, start kidnapping human beings. Then it happened to me. Probably you will not gain much by reading my story since it is pretty similar to many other alien abduction accounts I have read since mine took place. Also, I would like to add that since English is my second language, I immigrated from Santiago, Chile to Los Angeles, California in 1986, some grammar mistakes should be excused. My abduction took place at the beginning of 2008, during the last week of January. I remember waking up dehydrated, all sore and exhausted, feeling emotionally drained but with no memory or recollection of what had happened.

However, less than a month later I had my first flashback:

I woke up and instead of being in my bedroom, I found myself inside a clear glass cylinder, totally submerged in some kind of warm fluid, thicker than water, thinner than oil. To my surprise, I was able to breath this warm fluid without discomfort. I could also open my eyes without a problem. The solution was clear, of a greenish color and the container was softly lit. I remember, still fully submerged in this solution, that I slowly began to recall the abduction that had taken me away from my bedroom, minutes, maybe hours before. Impossible to tell. Then I made the connection with the place I was now in and real fear took hold of me. I remember desperately trying to get out of the container but I could not move a muscle except for my eyelids.

Finally, and all at once by sheer force of will, I was able to regain movement of my limbs. I jumped out of the glass container faster than a spring. Apparently, what I had been breathing while submerged was very different than air because I felt the urgent need to take a big breath of air as soon as I came out.

I was naked and dripping this fluid/solution that was sort of a slimy gel. The place was dark, very steamy with a strange, unpleasant smell. To my horror, I saw a row of glass containers, some of them giving off a green-yellowish glow, almost bright in comparison with the poorly lit cave-like room I was in. In each one these clear glass cylinders there was either a man or a woman, lying nude under this dense glowing greenish solution. I panicked and, yelling & screaming like a madman, I began to run towards a window of light I saw it at the end of a corridor. It was not easy to get to the light. This place was huge. The best way to describe it is like some sort of huge, dark, steamy greenhouse cave, very organic in nature. Screaming and running towards the white light, I passed many other containers, all identical to the one I had been in. My impression is that there were a few lit up, probably also with people inside, and the rest of them were empty.

Just a few steps before I reached the lighted area, still screaming at the top of my voice, two humanoids came to me from the opposite direction. One of them touched me on the shoulder and I passed out immediately. I don't recall how tall they were, but I believe the one who touched me either on my shoulder or on my side was about my height. 5‘8“, but he could have been taller.

For about a month, I kept having flashbacks of finding myself in this glass cylinder, breathing liquid instead of air. And then, once I regained mobility, trying to run away from the place. After having this first flashback, I knew that something was not right, but I decided to try not to think about it.

However, only a month later, I experienced my second flashback. I remembered waking up and finding myself this time lying on a table, flat on my back. I believe these beings had already been working on my head for a while and now they were doing some kind of a procedure, first inside one of my eyes, and then inside my nose. As I was just regaining consciousness, my memories of them working on my head are pretty fuzzy. However, the recollections become much clearer when the creatures began to work near and on my genitals . I couldn't see what they were doing since I only could move my head with great difficulty sideways and not the rest of my body. Whatever they were doing, the procedure was extremely uncomfortable and I was just begging them to stop. There were a total of 3 beings in the room. One was taller than the others. The taller one seemed to be in charge and the little ones that acted like robots, sometimes moving together across the room to work on a counter top straight across from where I was lying, and then coming back to my table to keep working on me. The taller one meanwhile, throughout the procedure, would try to console me by mentally telling me, in perfect Spanish, that it wouldn't take much longer, asking me to be patient, reassuring me that they were almost done. All these messages were placed directly into my brain. As far as I can remember, none of them ever uttered a single word or sound.

I believe that I ended up blacking out one more time before they were through with whatever there were doing to me. Two months after having this second flashback recollection, I was able to fully bring back to my mind the very frightening memories of the beginning of my abduction. Only then I became more certain that what I have gone through had probably not been just a dream. At one point during the night, I woke from sleep to find the room dimly lit with a greenish-bluish florescent glow. This room is very small and immediately I saw by the foot of the bed and surrounded by a greenish fog, three, maybe 4 small beings, grey in color, big almond-shaped eyes and short in stature. The smell in the room was unpleasant with an unidentifiable bad odor but definitely coming from a living being. I believe that I was able to sit up in bed, but I don't recall being able to perform any other movement after that.

In spite of my amazement at what I was seeing, I knew I was not dreaming and that these beings standing next to my bed were real. I remember just repeating to myself over and over, maybe audible but probably just in my mind:

I feel that the most frightening part of the whole abduction, even more than being examined, was waking up and finding these creatures standing at the foot of my bed. This flashback, the beginning of the abduction, was the last one to clearly come to my mind and it still frightens me the most.

I don't remember if they prepared me for the trip, but I began to feel very disoriented. I felt a buzzing sensation, like an electric current going through my body. Previously I had felt the same electricity in the room and on the outside of my skin, but now it was inside me as well. Then I remember floating upwards and incredibly being able to go out through the ceiling and roof of my house. I have a very fuzzy memory of seeing, while ascending, some beautiful, colorful lights and not feeling scared anymore. Then my next recollection is being submerged in the warm fluid that I have already written about.

I also have some flashbacks of additional events during the abduction. I do not know if the events I will now refer to happened immediately after the physical examination. My impression is that they did.

1.) I was shown a series of slides. I complained that they were coming too fast but I was told that the speed was right. Apparently, they were not mistaken because, when the show was over, I felt that I had gained a tremendous insight on many issues. I felt as if I had been in a dream my whole life and that just now I was waking up and gaining a clear understanding of the of the world around me. I do not recall the reason or reasons I felt so enlightened after seeing these slides. Above all considering that some of the images shown were just disasters taking place on earth, like volcanoes erupting, earthquakes and big nuclear explosions.

2.) In the same room, I was also able to see my whole life projected into images, extremely fast. I had the feeling that everything inside my brain, past memories, sensations, experiences, was also being watched and recorded by some kind of a device linked to me through the chair I was sitting on.

3.) I was taken into a small room to meet the hybrids. My memory here is very fuzzy. However, I remember being introduced to a kid who was related to me and apparently the product of the procedures done to me during my physical examination. The boy looked sick, very pale and with thin blue veins all over his face and body. In spite of his sickly appearance and not looking entirely human, I felt immediately a strong connection to him, and I knew as soon as he looked into my eyes that we were closely related, like father and son. We talked for a while, myself doing most of the talking, probably also using telepathy but I'm not quite sure. When I was finally told that it was time to leave, we both cried with tears. The separation was very difficult.

4.) I remember walking in a desert under a strong sun. I felt weird because I was naked. It was some kind of a test or experiment. I was either not understanding the instructions or not paying attention. I felt that they were disappointed with my performance.

Those are all the flashbacks/recollections I have. At the time of the abduction, I was sleeping by myself in our guestroom in order not to disturb my wife who needed to get up early to go to work. After my last recollection of what had happened in that bedroom, the beginning of the abduction, every little noise during the night would startle me, but now I am starting to feel more relaxed.