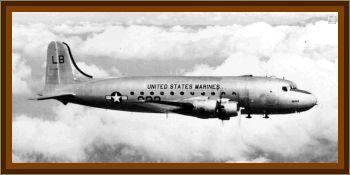 Many of the researchers and authors discounted the incident of C-54 as another case of the thunderstorm accident. Yes, its true that the C54, that took off from Bermuda on July 3, 1947 met with a huge squall, a massive thunderstorm.

The C54 was a military version of the aircraft Douglas DC4 and was capable of carrying 85 passengers. On the day of the flight, there were five crew members and the experienced pilot major Ward.

The report from the investigation board shows that the squall was actually not at all in the originally scheduled route of the flight. Right from the start, the flight started going off course, and apparently neither the pilot nor the navigator on board were aware of this.

Soon after it took off from Bermuda, it was far south of it's scheduled course. And then after a while, it suddenly made a course change and moved towards north and then south west. As a result, now it was heading straight towards the eye of the storm. It continued to fly in the same direction for a fairly long time till the ground radio operator heard a faint garbled SOS. The sound was so low that he ignored that to be a real SOS. Then the faint garbled sound was heard once again and then it was all silent.

The investigation board at Morrison Field, Florida went on to investigate why such odd change of course was done. They checked the credential of the navigator on board. He was a last minute substitute but a class-II navigator, which means he was qualified for the job. Major Ward was in charge. It is still unexplained how both of them could have made such a blatant mistake and had forgotten all their training to avoid a squall.

Only about a month before, a general instruction was given to all the pilots to avoid thunderstorms, yet Ward flew the plane right into it and the navigator guided him to do so. About 209 miles north east of Florida, the debris were finally found. It consisted of oxygen bottle and some equipment, all of which reflected a case of a sudden destruction.

Here is an extract of the final report from the investigating board:

After considering all available facts and existing weather conditions, it is the opinion of the Accident Investigating Board at Morrison Field, Florida, that the aircraft encountered violent turbulence and the pilot lost control of the aircraft. It is possible that structural failure was a factor prior to contact with the ocean. No evidence of fire exists.

There was no evidence of a ditching attempt and the debris found indicates that the crew compartment was torn apart on contact with the ocean. The last plotted position of the aircraft and the corresponding position of the frontal zone substantiates the weather assumption. Contributing factors to this accident were possible navigational error allowing aircraft to drift north of course to frontal zone and pilot error in that no apparent effort was made to circumnavigate the frontal weather.