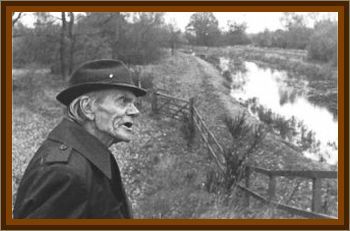 77 year old Alfred was fishing the Basingstoke Canal in the early hours when a brilliant light descended from the sky and settled on the tow path. Thinking it was a helicopter from the nearby MOD base, he ignored it and poured himself some tea from his flask. But then his dog, Tiny, began whining furiously at two small figures who had suddenly emerged from the darkness.

Both were about 4' tall, dressed in pale green coveralls from head to foot, he told reporters. And they had helmets of the same color with a visor that was blacked out. The strangers gestured for Burtoo to join them. Calmly setting down his cup of tea, the intrepid pensioner followed them along the tow path towards a disk shaped craft. I was 77 and didn't have much to lose, he explained.

Burtoo climbed up a set of steps into the craft. He found himself inside a black metallic octagonal chamber, which smelled slightly of decaying meat. The ceiling was so low that he had to stoop. I did not see any signs of nuts or bolts, nor did I see any seams where the object had been put together, he stated. What did interest me most of all was a shaft that rose up from the floor to the ceiling. The shaft was about 4' in circumference, and on the right hand side stood two forms similar to those that walked along the towpath with me.

One of the beings told him to stand beneath an amber beam of light, which appeared to scan him like a x-ray machine. What is your age? asked the being, in a sing song voice that sounded like a mixture of Chinese and Russian. When he replied that he was 77, it told him, You can go. You are too old and infirm for our purposes.

Bemused, Burtoo exited the saucer and returned to his fishing spot. The first thing I did, was to pick up my cold cup of tea and drink it, he recalled. Then I heard this whining noise, just as if an electric generator was starting up, and this thing lifted up then took off at a very high speed. Unfazed by the bizarre events, Burtoo returned to the task at hand. I got into what I had come out for, the fishing! Despite his rather curt reception, he later declared that his nocturnal close encounter had been the greatest experience of my life.