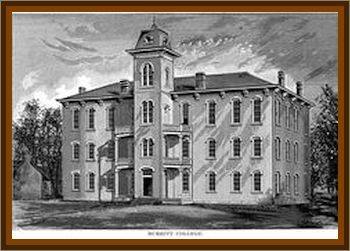 As day dawned, students at Burritt College in Spencer noticed two luminous, unusual objects just to the north of the rising sun, in what became one of the oldest UFO sightings in USA.

One of the objects was described as a moon, the other as a star.

While the moon like object began to grow smaller until it vanished from sight, the other grew larger and then appeared to change form, first into a globe and then into an elongated shape that was level with the horizon. The smaller light then became visible again, and increased rapidly in size, while the other object shrank.

The two objects continued fluctuating in a similar fashion for the next 30 minutes. Professor A.C. Carnes recorded the account in a letter he wrote to the Scientific American:

The first then became visible again, and increased rapidly in size, while the other diminished, and the two spots kept changing thus for about half an hour. There was considerable wind at the time, and light fleecy clouds passed by, showing the lights to be confined to one place.

The students sought answers for what they had seen from Carnes and other professors on campus, but no one could offer a satisfactory explanation.

Officially, however, the incident is still unexplained and remains a mystery.