Burnt By A UFO Laser Beam 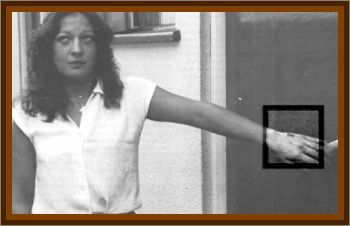 This case concerns Denise Bishop from Plymouth who was returning home around 11:15 p.m. She got out of a taxicab and approached the backdoor of her home where she noticed some lights in the sky behind.

As she got to the door her view became clearer and she could now see a massive UFO, her estimate was about 125' wide, the shape of the body of a crab, hovering silently above the houses. This is how Denise described her experience:

The object was unlit, and a dark metallic grey, but coming from underneath it and shining down on the rooftops beneath it were six or seven broad shafts of light. These were lovely pastel shades of pink and purple, and there was also white. I saw all this in an instant, and I was terrified. I hurriedly reached for the door, but as I put my hand on the handle, from the unlit side of the craft a lime green coloured pencil beam of light came down and hit the back of my hand. As soon as it touched my hand I couldn’t move but was stopped dead in my tracks. The beam stayed on my hand for at least thirty seconds, in which time I could only stand and watch the UFO. I was very frightened, although the UFO was a fantastic sight to see.

Bishop describes the green beam was like a rod of light that switched off. She opened the back door and says the whole incident was as if a film had been stopped and then continued as she continued with the movement before she felt frozen. She rushed indoors and as she did so the UFO rose in the sky and moved out of sight. She told her sister but they could see nothing outside. Denise was rubbing her hand and noticed spots of blood. She cleaned the blood off and realized she had been burned. The following day the police were informed but were unable to provide any help except for the telephone number of a local UFO group.

Investigations, by the local UFO researcher Robert Boyd, showed that three of the neighbours did not see anything but had reported that their pets were behaving strangely at around the time of Bishop’s encounter.

Denise was reluctant to seek medical help as she was due to leave for a holiday in Canada shortly and feared that a doctor may prevent her leaving the country. One strange part of the case is that a phone call was made to Bishop at work on Sept 14th by a man with a North American accent and claiming to be a reporter from CBS called Chris Bloomfield. She was initially suspicious and believed it was a hoax or even a secret government department wanting to question her so gave a brief statement without mentioning her burn to the wrist. Whilst on holiday in Canada, Bishop did find that there was a real reporter for CBS called Chris Bloomfield although it was never established if he had made a genuine call to her.

On Sept 27th the Sunday Mirror carried the story from the previous year of Zigmund Adamski’s strange death and rumoured abduction. The Coroner James Turnbull was noted as appealing for people to come forward with any further information about strange burns. Boyd forwarded the details on and received thanks from Turnbull but the case remained unsolved.