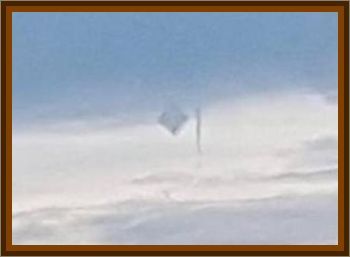 I was out on my patio watching our daughter play in the yard. A line of decorative trees bordered our property.

This silver gray circular object appeared over the trees at an unknown height. It appeared to be very high, but extremely visible against the clear sky. I watched as it came overhead. At this point I called out to a neighbor to look.

It was not drifting as a weather balloon would do. Rather, it was straight line movement. Before the neighbor could position himself to observe it made an abrupt angle turn and vanished within five seconds. Previously it was at a very slow rate of travel.

If it happened today I wouldn't hesitate as there are now so many believers.