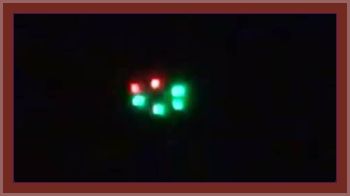 My sighting happened a long time ago, in 1974, at the time I was 12 years old and had never heard of UFOs, let alone seen one.

Some friends and I were collecting money from the local residents by going penny for the guy, which was common for children at the time. You were meant to make a guy by stuffing straw and the like into trousers and a shirt and then making a head. The result was supposed to look like Guy Fawkes. Then you knocked on doors and asked for a penny for the guy. However we were cheating and had dressed my friend in old clothes and a scary mask but were doing quite well in the penny stakes all the same.

We were at the end of Spinny Hill road which was a quite council estate backing on to farm land. I lived about 300' from where the sighting took place.

It was a cold and clear night with many stars visible, my freinds were struggling with the guy who was starting to get a bit heavy, we pushed him around in a wheelbarrow.

Then for some reason I dont know why, I looked up but instead of stars I saw a huge ring of red and green lights only a few feet above my head.

Inide the lights was a dark disk shape which was more of a shadow than a solid shape, underneath there was a kind of dome but again, it was just a kind of shape and not a solid object. It was perfectly still and totally silent, just sitting there.

The whole thing was so big that it totally filled the sky. I could see nothing else. I turned to my friends and said somthing like:

Wow look at that.

But when I looked back there was nothing there. I just couldnt belive it. The whole thing only lasted a few seconds but I will never forget it. My friends didn't see anything but it was there all the same.