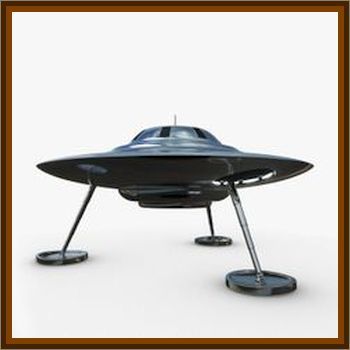 Some of the many odd patterns of UFO behavior are typified in the following sequence, which began in early April 1953. John Black & John Van Allen, were working their titanium mine outside of Brush Creek when they both separately observed a metallic saucer 8' in diameter, 6½' thick, with tripod landing gear, hovering over the area of the mine.

Over the next few weeks, the object returned on 4 occasions. On April 20, Black observed the craft from a distance of only a quarter mile. It was now obvious to the men that the UFO was interested in their mine. One month later, on May 20, Black returned to the mine and saw the now familiar saucer hovering only a few hundred feet high. It quickly took off and disappeared. Black approached the area where it had hovered and found several small 5" footprints.

Again, one month later exactly, on June 20, Black was outside the mine when he saw what he thought was a small child with a bucket. Upon approach, however, he saw the large saucer landed on a nearby sandbar. He examined the figure and realized it wasn’t a child, but instead appeared to be an unusual-looking small man wearing unusual clothes and carrying a cone shaped bucket. The being sensed Black approach and quickly ran into the saucer, which promptly took off.

And so began one of the strangest chapters in UFO history. Black alerted the local sheriff, and the story was somehow leaked to the press. The saucer appeared on schedule 3 months in a row, everyone was predicting a July 20th landing. More than 200 people arrived on the scene including local residents, newspaper reporters, cameramen and saucer enthusiasts. Snack bars and chairs were set up as if the event were a circus performance.

The craft never showed up and the Brush Creek ordeal came to a sudden end. The case was investigated by several major researchers, including Gray Barker & Paul Spade, both of whom were actually jailed by the Brush Creek Sheriff’s station when they tried to conduct a stakeout for the craft.