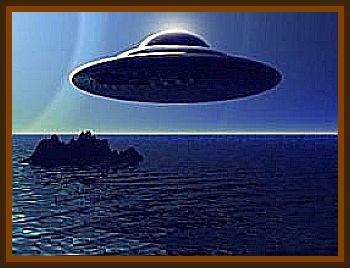 A lady correspondent of Lumières Dans La Nuit recently found out about these happenings when she had the opportunity to spend some time at the Mediterranean French fishing port of Le Brusc, in the Dept. of Var, south eastern France between Marseilles and Nice.

She was able to interview some of the men involved, having won their confidence, but only on condition that their names be not revealed

The account of the informant, a fisherman, is as follows:

2 years ago, in April 1968, 3 of us were fairly far out at sea, in heavy weather, with cloud and strong wind. Night had not yet quite fallen when, in a break in the clouds, a sort of thing appeared ovalish in shape, which was just hanging there in the sky.

It looked like a mirror and it was shining, and it did not move. Then a cloud passed in front of it, hiding it for a few minutes, but when the cloud had gone the queer thing was still there.

It seemed however to have changed color a bit and to be giving off pinkish flashes. Then, after about 15 minutes or so, it seemed to move very slowly from east to west, dropping gradually as it did so. And as the thing came down it seemed to change shape so that, instead of being vertical as it had been before, the oval was now horizontal and from pinkish the color had now turned to bluish.

The thing remained stationary over the sea for 2 or 3 minutes and then vanished before our eyes as though swallowed up by the waves, and we did not see it again.

The sighting had lasted a total of 25 minutes. We heard no sound, the thing was absolutely silent despite the fact that it was not far from our boat. It gave out no trail, no flame, no sparks, and was absolutely bare of all marks or trappings, etc. We have no idea what it could have been.