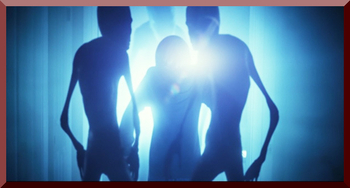 Jane Doe was awoken by three creatures in a bright egg shaped room, with light coming out of the walls, ceiling and floor, with a soft luminous glow. They were speaking to her as she awoke before she opened her eyes, so she might not be afraid. They spoke in gentle penetrating words,

'Do not be afraid or scared, we love you and care for you.' They introduced themselves as 'One, Two and Three.' One was on her left, Two was behind her head, and Three was standing to her right. When she opened her eyes, she was shocked, yet there was a strange familiarity with them, as if they have known her all her life. She was naked, and felt dazed, even drunk, she doesn't drink.

She went to sit up and Two placed its huge hand underneath her neck and back to help support her. They were chatting incessantly using telepathy. She could hear them talking in clicks and pops sort of like crickets chirping but quicker and more complex.

We are looking for signs of tampering on a genetic and physical level. Three had a device in its hand and beginning at her right toe it brought the hand held device up her right leg about ten cm above her skin.

The creatures reminded her of ants. They had deep dark eyes and tiny noses and mouths, and their powdery white skin reminded her of shark skin. They were tall, thin, yet strong. She was going to ask where she was when the walls, ceiling and floor changed to match her thoughts just like it was projected somehow from outside the craft and she could see they were high over her suburb and she could see the blue cross on top of the church, up on the hill she lived at the foot of.

She could see all the city lights below twinkling like a million candles. These aliens didn't have to wake her up and show her this view, frankly she would have preferred they hadn't. However she knows for sure that these particular aliens would never hurt us. She woke up late for college by almost three hours.