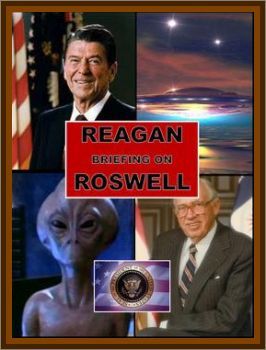 President Reagan’s ET Briefing An excellent source of provocative insights into how our nation’s intelligence agencies have successfully engineered decades of deception regarding the UFO/Extraterrestrial issue are revealed in a published transcript of President Ronald Reagan’s ET Briefing.

In January 1981, former Hollywood film star, Ronald Reagan took office as the 40th President of the United States. Reagan served as one of our county’s most popular Presidents.

During World War II, Reagan had served as a Captain with an Army Air Force Public Relations Unit and upon return to civilian life, he went on to distinguish himself as a motion picture actor. Following a successful film career he became active in politics and won election to the California governorship in 1967. And over the years, Ronald Reagan was known to have an abiding interest in UFOs. In fact he claimed to have seen UFOs himself on at least two occasions.

Allegedly in 1982 during a White House screening of the movie 'ET - The Extraterrestrial', President Reagan leaned over to director Steven Spielberg, who was sitting right next to him and said:

I bet there aren’t 6 people in this whole room who know how true this whole thing is.

And later during the course of his Presidency he publicly warned on multiple occasions of the potential threat that extra terrestrials might pose to the civilizations of planet Earth.

According to an unverified internet transcript, in March of 1981, President Reagan met with CIA Director William Casey and a select team of advisors at Camp David to be specifically briefed on the subject of Unidentified Flying Objects and Extraterrestrial Visitation of planet Earth.

This transcript reveals extraordinary insights into both the issue of off world alien life as well as the classified intelligence operations of the United States government.

It is not the intent of this essay to determine the veracity of this transcript. But to simply share a sampling of its content,leaving it up to the reader to evaluate its validity for themselves. However, if authentic, Reagan’s briefing reveals how far down the food chain elected officials are in regard to access to classified information. Also it shows how completely dependent our elected executives are to the selective facts given to them by the intelligence bureau.

Along with William Casey, Reagan was briefed by an agency operative introduced simply as 'The Caretaker'. This man claimed to be custodian of the UFO secrets for 31 years, and that he had briefed Presidents Nixon and Ford as well.

President Carter, he said, was not in the loop.

At the outset the Caretaker revealed:

All the debris and EBEs recovered from the first crash site were taken to Roswell Army Air Field, Roswell, New Mexico. EBE was treated for some minor injuries and then taken to Los Alamos National Laboratories, which was the safest and most secure location in the world. Special accommodations were made for EBE. The debris was eventually transferred to Dayton, Ohio, home of the Air Force Foreign Technology Division. The second crash site wasn’t discovered until 1949 by some ranchers. There were no live aliens at this site. All this debris went to Sandia Army Base in Albuquerque, New Mexico.

The NSC felt open disclosure could lead to a nationwide panic if all information about UFOs and alien visitation were released. As well, the Caretaker explained that public awareness of ongoing research and exchange with captured aliens could seriously jeopardize the future space program of the United States. Releasing our secrets about UFOs and alien visitation would also cause a panic among religious leaders around the world. Therefore, MJ-12 decided that an independent scientific study of the UFO phenomena would be needed to satisfy the public curiosity.

The Caretaker revealed an important operation developed over the years to safeguard UFO information. We call it 'Project DOVE'. It is a complex series of operations by our military intelligence agencies to disinform the public. As you know, Mr. President, we have some highly classified aircraft. In order to keep these aircraft secret, we tend to convince, at times, the public and press that maybe UFOs are real in order to make the public think what they are seeing are actually UFOs instead of our own secret aircraft even though we know maybe some of the sightings are of actual UFOs.

If you consider the first person who helped us with this disinformation program, Mr. George Adamski, back in the early ’50s, and up to all of the movie productions of UFO related movies. This helps the public to keep their minds open, but also allows us to keep our secret aircraft away from the public’s knowledge.

Some information was evaluated with the idea of using the gained data to advance our own space technology and future space programs. They, EBEs, can travel that great distance by means of space tunnels. They seem to be able to bend the distance from one point in space to another.

The Caretaker and his advisors outlined a wealth of data gained from EBE, the captured alien from Reticulum, as well as the formation of a personnel exchange program that involved 12 Air Force servicemen visiting EBE’s home planet called Serpo.

CIA director William Casey cautioned the President against the sensitivity of broaching this topic, but Reagan snapped…

For Christ sakes, I’m the President of the United States. I should know if we are endangered by some threat from outer space. If you have something to say about a threat posed by this one species of aliens, then I want to hear it.

And so the Caretaker explained: Mr. President. We call the hostile aliens simply that, 'HAV' , meaning Hostile Alien Visitors. MJ-12 placed that code on them back in the ’50s.

Astonished, Reagan asked: You mean to say, these HAVs have been visiting us and kidnapping our people since the ’50s?

The Caretaker replied: Mr. President, yes, well, they have been around since then.

Director Casey added: These aliens can imitate humans. They can look like blonde humans. However, they are not blonde, but ugly looking insects.

The Caretaker then revealed that as of that date our agencies were aware of five different alien types: Mr. President, the 5 species are called, Ebens, Archquloids, Quadloids, Heplaloids and Trantaloids. These names were given to the alien’s species by the intelligence community, specifically MJ-5. The Ebens are friendly, the Trantaloids are the dangerous ones.

The Caretaker’s advisor added, Well, Mr. President, the hostile alien species is responsible for abducting some humans. We can clearly prove some 80 Americans were abducted from about 1955 until the present, the last known one in July of 1980. We have a special military intelligence unit keeping track of these abductions. We have FBI agents attached, to assist us when needed. We have NSA and in some instances, CIA personnel helping.

Clearly alarmed by such astounding revelations, Reagan insisted to be informed of future developments regarding hostile aliens and to be assured that proper defense contingencies were available in the event that any nation on Earth might face alien attack.

Knowing such information, is it any wonder that President Reagan publicly speculated on multiple occasions about the possible reality of Extra terrestrial danger…

But, I’ve often wondered what if all of us in the world discovered that we were threatened by a power from another planet… Wouldn’t we all of a sudden find that we didn’t have any differences between us at all, that we were all human beings, citizens of the world and wouldn’t we come together to fight that particular threat?

Is it coincidence that Reagan survived an attempted assassination just weeks after his ET briefing in March 1981? His successor would have been George Herbert Walker Bush, former Director of the CIA and the Council On Foreign Relations! CIA Director William Casey died six years later of a brain tumor in May of 1987. And, of course, George Herbert Walker Bush was elected to the office of President in 1989.