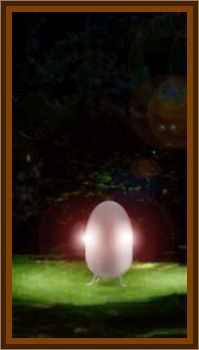 Driving 2 miles north of La Harpe on Rte. 94, Violet Bricker observed the flash of lights on what she first believed was an approaching plane, as it neared, she saw it was more dirigible shaped and closing on her rapidly on a collision course.

It stopped and hovered over the telephone lines opposite her car, silent, it was egg shaped, about as long as a Piper Club and 10' thick, and had a single bright yellow white light on the end facing her. No doors, ports, or landing gear were seen, a lateral line like a seam encircled it.

It began revolving in a clockwise motion on its axis, bringing the other end in view and exposing a 2' platform on which stood a man wearing a bulky, white one piece suit. He was about 5½' tall, stocky in build, and he stood with his left hand against the object and his right hand on his hip, staring directly down on Violet. His face had a ruddy complexion and his eyes were dark, he looked entirely normal otherwise.

The object drifted about on its axis again and the figure was lost from view, rapidly disappearing from view.

Violet was so taken aback by the experience she could not recall if she actually stopped her car or not, she recalled seeing a man and a woman on foot not 20' away to whom she signaled frantically to catch their attention, but to no avail.