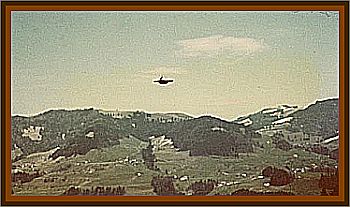 The time and hour are not accurate but it happenned in 1975. Me and my family lived in a place vary far from downtown Brasilia.

My sister and I were going back home after a school day along with two other girls who lived in the same place. My mother parked the car just in fornt of these two girls house and we were received by their parents on the porch. I stayed in the front seat of the car.

I called the people that were just a few feet away from the car and they witnessed the same phenomenon. Then this small object went upwards and a black ring formed around it, and it disappeared.

This was the first sighting, there was another one but this one was really scary. My sister had to see a psychologist after that.

All I can say is that in that place lived the top ranking military generals in the Brasilian army and it was well guarded. One of the witnesses was a major in the army.

From that day on my life changed. It was like a new understanding of everything. After these two sightings my father invited two military jet pilots for a talk about UFOs. These two pilots confirmed that they had already followed lots of targets over Brasilia sky but they were not allowed to speak about it.