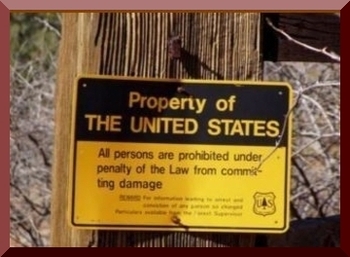 From the Phoenix Lights to the Mogollon Monster, Arizona has long been known as a mecca for the strange. According to the MUFON's reporting archives, Arizona ranked as one of the top three states in the country for UFO sightings per capita in 2013. Arguably, one of the most concentrated areas of reported anomalous activity is centered in.

All things given, Roswell incident as being a hotbed of UFO and paranormal activity.

But tipping the odds in Arizona's favor is one site where you can expect the unexpected. Known as the Bradshaw Ranch, this place has seen more paranormal activity in recent years than perhaps any other US location. So much so, it appears to have attracted the attention of the U.S. Government.

A cluster of paranormal activity has been reported. From sightings of strange humanoid entities, to the pulsating lights of UFOs, and the most massive Orb activity ever witness by investigators. Along with the portal.

Now before you get too excited, heed advice to the adventurous, this is definitely not a place to venture out by yourself... apart from the rocky off roads and pitch black of the desert at night, the ranch itself is strictly off limits to the public.

In 1960, Bradshaw acquired a large parcel of land covering 140 acres. At the time, the only remaining structure was an old adobe house. He quickly put to use his Hollywood contacts and utilized the ranch as a filming destination.

it was during this time that Hollywood gained significant interest in using the majestic red rocks as a backdrop in Westerns, television programs, and commercials. Bradshaw became integral in their productions.

According to the tour company website operated by the Bradshaws, Bob worked on:

28 films, 19 television shows, and 77 commercials during his lifetime, and the ranch itself hosted 5 films, 2 television series, and numerous commercials.

An old western town movie set was erected on the grounds during filming of the 1967 Elvis Presley film Stay Away Joe, and remained a fixture of the property until the 1986.

Bitter Creek, as the town was known, was rebuilt in the mid 1990s. It was during this time when John Bradshaw took over management of the land and utilized it as a dude ranch.

Bradshaw Ranch wasn't all Hollywood glamour though, it hosts an obscure history that revealed itself suddenly, though for those involved, not unexpectedly.

It was in 1992 that Bob Bradshaw Jr.'s wife Linda, along with several of her sons, began to catalog unusual activity on the property.

The unusual activity on the ranch continued to be an almost everyday occurrence until the late 1990s when it seemed to stall quite suddenly.

After years of property tax hikes and the government's pressing interest in the property, the ranch became another parcel of federal land, acquired by the U.S. Forest Service. In May of 2003, the Bradshaw's vacated the property.

But no, the entrance gates to the Bradshaw Ranch remain securely chained by three different padlocks and two large signs which prominently announce:

Property of the US Government - Trespassers will be prosecuted to the furthest extent of the law!

And they are serious about that. From what has been determined, all prior attempts to gain any kind of official permission to enter the site have been flatly refused without exception or explanation.

As far as the general public is aware, the mysterious Bradshaw Ranch is officially called an archaeological site, and remains firmly off limits.

But what makes the Bradshaw Ranch so fascinating for UFO believers and those keen on the unexplained, since the mid 1990s and significantly around the time the US Government showed so much interest in the site that they were prepared to acquire it, incredible and strange phenomena began to be reported, leading one to rationalize the strict no-go policy as perhaps a good idea.

Bizarre paranormal activity was first described by the Bradshaw's themselves. Linda Bradshaw, while residing on the property, described unexplained balls of light and witnessed UFO phenomena which lead her to conclude the site had become an active interdimensional portal.

Linda herself wrote that one evening while she was walking on the property:

Before my eyes, a huge and brilliant light appeared in the sky above me. I did not see anything but the light itself and it remained there for only a few seconds.

On a subsequent evening, now wiser and with camera in hand, she observed the light to appear again in the same spot:

I only had time to click the shutter twice, when the light instantly closed, leaving me to question whether it had been real.

According to Linda the photographs, taken on 35mm film, revealed an enormous rectangular light in the dark sky. Linda Bradshaw went on to co-author a book in 1995: Merging Dimensions, which details her many strange experiences on the Ranch, including preponderance for Orbs of many colors to float around her.

She describes these and Comet like objects which hovered off the ground and shot energy past her.

As word of these incidents grew, the homestead was soon featured on a paranormal TV show called Sightings in 1992.

Our digital photographs were to quickly reveal brightly colored orbs floating around the entire area, but it is with the assistance of night vision binoculars that we were able to see a massive concentration dancing in and around the steel windmill structure itself.

The energy in the area was one of serenity and even camaraderie between strangers. Some suggest that these orbs have a healing effect.

Linda Bradshaw herself captured images of a nonexistant Oceanside in her photographs there and new reports tell of people hearing 40s music and soda bottles found indicative of that era.

This area was first inhabited by indigenous tribes including the Anasazi, Hohokam, and the Sinagua, all of whom were deeply rooted in the belief that their ancestors came from the stars. Petroglyphs dot the canyon walls, hinting that visitors from other worlds had wandered amongst them and many locals maintain the belief that otherworldly visitors remain attracted to this unique area.

It began slowly with sightings of unusual lights in the clear desert sky and escalated into tales of Bigfoot, UFOs, extraterrestrial beings, dinosaurs, and strange creatures.

The experiences Linda reported, along with other witnesses, border on the strange side, even for the UFO community.

Linda firmly believed that the ranch was home to what she referred to as a light portal. She inferred that whatever the anomalous and strange activity occurring was due to an interdimensional window to which creatures benign and benevolent could freely travel from one dimension to another.

One encounter Linda described was that of being woken by one of her sons, who was in the company of a woman and her daughter, in the early hours of the morning. She alleges that at approximately 2:45 a.m. her son and the woman not only spotted an unidentified craft but had an encounter with extraterrestrial beings as well.

Strolling past the window were four short statured aliens wearing tight fitting one piece uniforms of a light tan color. They were what are typically called the Zeta Reticuli, also known as the Grays, only these appeared to be a bit more ashen colored, almost white. Once the beings were out of sight and the witnesses recomposed themselves, the three of them jumped into their car and sped to the house where I was sleeping.

I remember so vividly how my son vigorously shook my arm to wake me up. I can still hear the fear in his voice as he said: Mom, wake up. They're here!

I raised up and said: Who's here?

He exclaimed: The aliens, Mom.

The encounter further evolved when Linda saw one of the beings outside, and resolved to investigate further the following day.

Small unexplained footprints were spotted in the dirt and the evidence was documented via her son's video camera.

If the story is to be believed, the strangest turn occurred when the witnesses spotted what they referred to as a dinosaur in one of the washes. Two of the witnesses described a dusty colored, 5', lizard like dinosaur that stood erect, while the other two only made it in time to see a long tail vanishing into the bushes. In future encounters, they would discover large reptilian like prints on a reoccurring basis.

The strange sightings persisted, and Linda continued to document to the best of her ability.

She would take photographs in random areas to see if things would develop on film that she could sense but were invisible to the naked eye. The photos were taken on 35mm film and developed at a local photo processing center. She amassed a large collection of photos of light anomalies, what she believed to be alien beings, as well as various unidentified craft.

She also captured and had interactions with a Bigfoot she referred to as 'Big Girl' and believed that she was in the company of young offspring as well.

As a self described animal lover, Linda became increasingly agitated that some of her dogs and horses were falling ill with tumors and other maladies the vet could not rationally explain.

She was also disturbed to discover that someone or something had torn the manes off several of her horses.

She was perplexed, stating: Her lovely, long golden mane was missing. The mare's mane was not cut off evenly. It looked as if it had been torn off, resulting in extremely jagged edges.

She surmised that it could not be the work of humans, but what ripped the hair and the purpose of the action remains a mystery to this day.

These public purchases will serve to preserve the spectacular open landscape well known throughout the world, to provide opportunities for additional access for recreation, and to protect archaeological resources. Keep Sedona Beautiful is hopeful that a $3.5 million appropriation in FY 2001 will allow for the purchase of 90 acres in Yavapai County locally known as the Bradshaw Ranch.

Conspiracy theorists were quick to dismiss Kusner's words, and insinuated that the ranch was really purchased in order to conceal the powerful interdimensional portal alleged to exist on the property. Others speculate that it was a tactical maneuver to conceal a top-secret military base and an even larger extraterrestrial cover-up.

There have been rumors for decades of the existence of top-secret underground bases and an elaborate tunnel system, which some suggest is used by both extraterrestrials and the U.S. military. They vary in location, and some believe there to be entrances at a large cement plant in Jerome, beneath Bradshaw Ranch, and in various canyon areas around Sedona.

Numerous reports of hikers encountering and being threatened by heavily armed soldiers with no visible insignias on their uniforms have strengthened this opinion in believers.

In April of 2013, Discovery Channel's Uncovering Aliens filmed multiple segments at the ranch. During filming, self-described extraterrestrial contactee Steven Jones alleges that he experienced his own bout of the unknown. While an interview was being conducted with Dongo, Jones had wandered off on his own, past the properties windmill above the fence line on the hill. Jones returned thirty or so minutes later, interrupting the crew, flustered, asking the time and yelling for everyone to look at his wristwatch. It had stopped. He recounted that he had heard unusual voices or odd whispers coming from somewhere around him, experienced a brief period of missing time, and visually pointed out the electrical disturbance of his watch. The experience was not aired on television, and we can only speculate as to what really happened when Jones was alone in the desert.

Bradshaw Ranch is set to remain an enigma. The likelihood that any serious investigation could take place, akin to the in depth scientific endeavors of the National Institute for Discovery Sciences (NIDS) at Skinwalker Ranch in Utah, is slim. The U.S. Forest Service maintains a strict no trespassing policy in order to protect the historic and anthropological landmarks on the land.