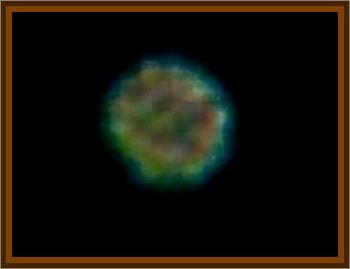 I and two of my friends were walking home from our local burger hangout restaurant called Wills & Dovey that was located on the outskirts of a coal mining camp that I was born and lived in until moving from there at the begining of the summer of 1958. The restaurant was located approximately two miles from my house.

In the summer of 1955, myself and my two friends, were half way home at approximately 11:30 p.m. on a Saturday night walking and discussing which girls in my town were pretty and their physical attributes and the ones we would like to makeout with. I mentioned this about the girls just to let you know that UFOs were no where near my thoughts at that time.

I was thirteen and half, my first friend was 14 and my second friend was 15. That night the sky was crystal clear for my town had no street lights that could have distorted my view of what I was about to witness. As I stated, we were half way to my house when a sparkling object 90° angle to my left caught the corner of my left eye. The sparkling white object was about 50' off the ground and about a quarter mile away, and the size of Venus from my perspective located over or beginning of the negro quarters as we called it at that time.

When I turned my head to look at what had gotten my attention, the sparkling white object begain to move rapidly toward me, but not in a straight line instead it corrected its course to the right and swoopped around the backside of the rock dump then corrected its course to come to hover about 20' above my head the object size had grown from the size of Venus to the size of a beach ball and the color changed from white to translucent yellow to translucent orange then there was a slight pause in the color change maybe one to two seconds then a stark color change going from traslucent orange to a cloudy smokey flat black to black the pause of flight was over it went up veritical at a rapid rate out of my sight.

Let me point out that once the object began to move, the sparkle stopped, but the object was white until it paused above my head. When the size and color trasformation occured. The object never emitted a sound at any time from movement to pause.

After the object disappeared, I turned to my friends and ask:

And their response was:

Apparently I was the only one to witness this event.