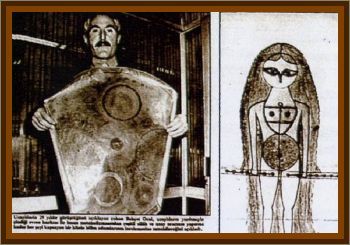 Nejdet Boyanay started to experience his first encounters with a mysterious entity when he was 10 years old. He still remembers what happened that night with interesting details. According to his report, he was lying down in his bed and starting to fall asleep. But suddenly he noticed that he wasn’t able to move. All his body was in a complete paralysis. He tried to yell and call his mother but he couldn’t.

After that night he had at least two encounters in a week with a strange visitor. He was touched by him and he says that the hands of the visitor were extremely soft and the touch was sticky like a jellyfish. Later he drew a picture of the visitor. Whenever he came, Nejdet found himself in a paralytic condition with a strange humming sound filling his ears

And when the visitor left, the young graphic designer felt as if he was stuck in some kind of vortex. In all those years Nejdet couldn’t speak about his visitor. He wasn’t allowed to speak about his experiences.

Nejdet got married, and after the marriage the encounters increased. In 1996 he decided to give an interview about the experience. But this would be the first and the last interview. Because after he spoke with the reporters he had a strange accident in the shower.

According to him, the alien got very angry and tried to drown him. After this incident Nejdet never granted any more interviews about what happened to him.

Nejdet wasn’t very interested in the alien abduction phenomena. He believed that the being which contacted him was a kind of negative demonic entity. But it was obvious that he was totally under the control of his visitor. The visitor was scaring him a great deal and Nejdet never dared to talk about him to his family since his childhood.

This wasn’t a spiritually enlightening contact. This was fear, mental and physical control during all his life. There were no promises of being lifted to the 4th dimension or saved by the Extra Terrestrials. As Nejdet was very scared of sharing his experience, we haven’t heard from him since he gave this interview.

In Turkey, the strong belief in the inter-dimensional beings or jinns, sometimes causes confusion. Abductees can mistakenly confuse alien abductions with demonic jinn attacks. As the general aspects of the contact are very similar both in jinn and alien attacks, it can be hard to see the difference. Both jinns and aliens leave physical traces, such as bruises or cuts. Both of them can communicate with the humans using telepathy