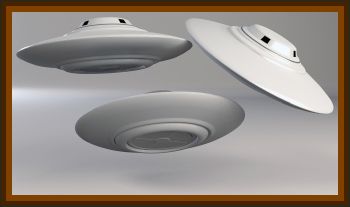 It was a dark, clear night. Looking almost straight down at the city lights, I saw a circular object on or near the ground, unmoving. It seemed to be internally illuminated with segments of red/yellow and green light which were spinning slowly clockwise.

I estimated its size as about 40'. As I watched, it turned bright white and simultaneously shot off to the North at a speed of around 600 knots. In a few seconds it was miles ahead of my aircraft and climbing through my altitude. I pointed it out to my copilot and we watched as it arced out over the sea and disappeared in the distance at a great height. The total time of the sighting was maybe 12 seconds. I continued North to Baltimore and made a left hand circle around the city, then headed back to the South.

As the city lights were falling behind, my copilot slapped my arm and said:

Did you see that?

I hadn't seen anything. He said a white light had dived past our right wing very closely at high speed. We looked around but saw nothing.

A few minutes later the radio came alive with chatter about a plane crash near Bowie. We heard no more that night. The next morning I went back to the base to file a report, as we were required to in those days.

No one ever contacted me about the report. Then I read an item in that day's Washington Post about a false report of a crash.

I quote it here:

A false report of a plane down near Bowie, MD, led more than 500 police, fire and military authorites on a 2 hour search last night. Minutes after the report, 28 state police cruisers, an additional 11 Park Police units and dozens of fire and rescue squads from 8 counties joined in the search.

The report originated with a caretaker at the Womens' Reformatory at Jessup. State Police said that military units on night maneuvers had probably shot off flares, leading to the report, state police said.