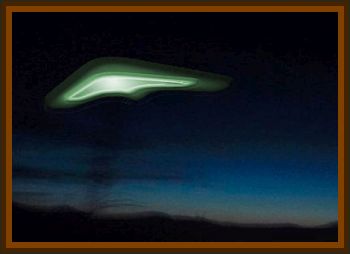 An equilateral triangle, lit at the tips, hovering just off I 95 between Brunswick, & Bowdoinham ME at approximately 6:45 p.m.

I was driving in the northbound lane of I-95 between Brunswick & Bowdoinham Maine. It was the late part of dusk, about 75% dark. The object that I saw was on the opposite side of the highway, hovering perfectly still about 15' above the tree line, which would make it about 50' to 60' in the air.

The object itself was an equilateral triangle approximately 15' to 20' on the side. At each point, on the underside, was an almost painfully bright blue white light.

The sky was in the period of late dusk, but not entirely dark. Thus, it was possible to see the edges of the craft more or less clearly in contrast to the sky. The object was perfectly still, and made no sounds that I could hear, even after rolling down the window.

The part of the highway in which the sighting took place consists of a long gentle curve to the right, with the southbound side of the highway on slightly higher ground than the North.

As I began the curve, the object came into view. It was very bright in the near dark lighting conditions, and my first thought was that I was looking at some strangely lit new radio or cell phone tower, and even remember thinking:

Gee, that’s awful bright to put right over the highway like that at night, its as bright as a car’s headlights on high beams.

As I got closer to the object, I realized swiftly that as far as I could see, there was no tower supporting it. It was at that time that I realized I wasn’t looking at a normal object, so I slowed down considerably, and really did my best to take in as many details as I could before I drove out of sight.

The object was triangular, and black as far as I could tell. The corners and edges were very sharp and distinct. I did my best to take in as many details as possible. I rolled down the window to try to hear anything, did some mental evaluations of the height above the trees, which wasn’t very great, and I tried to look at the underside, which I got a great view of from my angle as I drove by/under it.

Something about what I was seeing made me uneasy. I felt like I was missing a crucial detail, even as I did my best to get all that I could.

It wasn’t until I sat down to start composing this account that I realized what it may have been, and it is simply this:

It is an eerie realization to make after the fact, because at the time, all I thought was how weirdly perfectly black it was. It’s the thing that now, in retrospect, makes me even more convinced that what I saw was out of the realm of the unusual.

Something else that I thought was odd was that, despite the fact that there must have been 6 to 10 cars on the highway going in either direction, no one even slowed down or seemed to take notice of the object.

Admittedly, as interested as I was, I didn’t stop either. But it was something interesting to note.

The final piece of possibly related information is that less than 5 minutes later, I saw a helicopter moving very slowly over the highway perpendicularly to road. It moved from my side, over to the southbound side.

In more urban areas, the sight of helicopters is fairly common, but up in rural Maine it certainly is not, especially moving slow and low over the highway.

Now, there is a small air force base in the Brunswick area, which might explain why it was there, but in the many years of traveling this route at least once a week if not much more frequently, never have I ever seen one.

After traveling out of sight, I tried going over every reasonable explanation of what I saw in my head. In the end, there were only 2 mundane explanations that are at all possible for what I saw.

The first is that it was a helicopter, since helicopters are the only conventional aircraft that can hover at that height. However, there was no wind displaced debris, as there would have been, and as close as I got with my window down, I would have heard it as well, which I didn’t.

These details aside, the fact that I clearly saw a helicopter 5 minutes later at a very low altitude and a very slow speed means that it wasn’t a helicopter. The second possible mundane explanation was that it was in fact a new radio/cell phone tower.

Keeping this in mind, I specifically drove slowly along that stretch of road on my return trip looking for a tower, or for anything for that matter, that could possibly have given off that light. Needless to say, had I found something, I wouldn’t be filing this report.