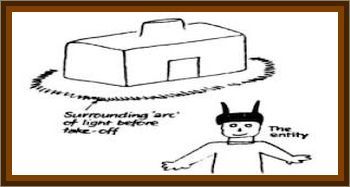 One of the earliest UFO reports comes from the first days of the post-Victorian era in 1901. The witness was a young boy of 10 who chose to remain anonymous when he told his story. Returning home to Bournbrook, West Midlands on a warm summer day, he walked down a path near the back of his home and noticed a strange object sitting on the grass. It was around 4” in height and width and no more than 6” long. It had no windows, just a small door and a turret.

Two small entities came out of the door. One of them approached the witness with his hands held in such a way as if to signal that he should retreat and keep back. They were both described as humanlike in a close fit grey/green military style uniform, clean shaven and about 30 - 40 years of age. Both also wore a cap that covered their ears with a wire like protrusion from each side.

The entities then quickly returned to the craft as the witness began to back off. He recalls a bright flash and an electric arc lit all around the object. There was a whoosh sound and the object disappeared rapidly with a pulsating red light above the rooftops. A number of local neighbors remembered hearing the noise.

The original witness never considered the experience to be a UFO or alien encounter and had often tried to make sense of his experience. He even drew this sketch when interviewed again in the 1950s. He still believed that what he saw was something odd rather than something from another world.

The tale, if true, is one of the very first humanoid contact tales of the 20th century. Compared to other nations, sightings of alien beings have been few and far between down the decades across the British Isles.