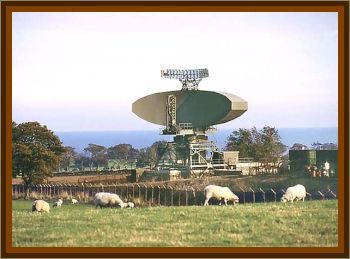 Location: Near Alnwick in Northumberland, England

RAF Boulmer, an important radar control center on the coast of Northumbria. In the early hours of July 30, 1977 airmen on the night shift were alerted by a call from a civilian who could see two bright objects hovering over the North Sea. The duty controller, Flt Lt A.M. Wood and a group of airmen then emerged from their bunker and saw the UFOs for themselves.

In his detailed report to MoD, Flt Lt Wood says the objects were close to the shore and stationary, at a height estimated between 4000' to 5000'. They appeared to move apart and then together as they slowly climbed into the clear sky. No imagination was required to distinguish the shape, he wrote. Westerly object was conical with apex at top. Object seemed to rotate and change shape to become arrowhead in shape. The easterly object was indistinct. He said the UFO closest to the base was round, luminous, and 4 to 5 times larger than a Whirlwind helicopter.

Flt Lt Wood’s story was supported by Cpl Torrington and Sgt Graham who were on duty at a picket post outside Boulmer’s underground operations room. They said the westerly UFO moved and changed shape to become body shaped with projections like arms and legs. All were described as reliable and sober in a MoD report. The descriptions, and more significantly, the fact these UFOs were visible for one hour forty minutes makes one suspect they may have been bright stars or planets. But in his report Flt Lt Wood says that shortly after disappearing visually, two unidentified contacts were detected on the base radars at a range of between 20 and 30 miles out to sea. These slowly moved northeast as they climbed, then parted, one climbing to 9,000' estimated and moving east, the other holding 5000' to 6000'.

While the UFOs were being tracked, he contacted the controller at RAF Patrington, an early warning station on the East Coast. He confirmed the two unidentified blips were visible on the radar picture there, which was relayed directly to RAF West Drayton in Middlesex. But oddly, the Senior Reporting Officer at headquarters was less forthcoming when asked if he could see the UFOs.

The events at Boulmer were not the first that year. In May dozens of UFO reports were made by people in Humberside and Lincolnshire to local police and MPs. But the most puzzling report has remained secret until now. At 10:20 p.m. on the night of May 21, three airmen at RAF Waddington, where a squadron of nuclear armed Vulcan bombers were based, saw a triangular shaped white light moving erratically overhead. Minutes later the duty controller RAF Patrington tracked a unidentified contact moving in a zig-zag fashion in a similar direction. Radars at Waddington also saw the UFO for a period of four minutes before their screens were partially obliterated by high powered interference which subsided when the UFO, disappeared.

A report on the case said the equipment was working normally both before and after the UFO appeared. The results of the investigation are not on public record, at least in the files of S4f, Air, who were the MoD’s X-files unit, at the time. S4 was the civilian MoD branch that, so we have been led to believe, was the single focus for all UFO reports made to the British Government at that time.