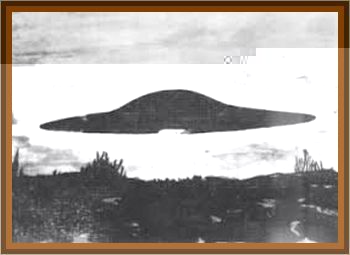 An extraordinary UFO sighting was reported one night in March, 1958, during the Algerian War, at a Foreign Legion camp at Bouahmama in the Sud Constantinois.

The sole John Doe. Legionnaire John Doe, was on sentry duty outside the camp. The site where he was consisted of a fortified emplacement dug out of the ground, lightly armoured and equipped with a telephone connected to the camp.

The night was cloudless and the moon was shining. All was silent on the desert landscape. No large scale operations were being carried out in the area at the time so John Doe, who had been in the Legion for three years, was not feeling especially anxious. He was sitting on the ground near the trench, and had his rifle. If anything unexpected happened, he was supposed either to fire his rifle or call the camp by telephone.

What had happened, we cannot say for sure.

John Doe remembers seeing a positive, physical phenomenon of enormous size. But he feels that something most unusual happened to him psychologically. And he freely admits that there might well be a difference between what he sincerely remembers and what actually took place.

It began with a whistling noise, the sort of noise you hear if you blow into the neck of a bottle. This sound seemed to him to be coming down from the sky. He immediately looked up, and saw an enormous, roundish object descending. It stopped when it was about 125' above the ground, and began to hover there, motionless and silent.

He estimated it to be as much as 1,000' in diameter. As seen by him slightly from below, during the arrival and take -off phases, it seemed to be elliptical in shape, quite independently of the perspective effect that makes a disk look elliptical when observed from a point outside the disk's center line. Its span might, he thought, have been in the neighborhood of 800'. He estimated the distance between himself and the nearest edge of the object at little more than 150'.

When I asked Monsieur John Doe to extend his arms towards the ends of the object as he recalled seeing it, he held them out at an angle of about 100° between them. This estimate would fit quite well with the estimates given above of its size and its distance from him.

The object was surrounded by pale green light, and an intense conical beam of emerald green light was coming from the center of the under part towards the ground.

Legionnaire John Doe did not fire his rifle, nor did he pick up the telephone. He just remembers staring at the object for 45 to 50 minutes. The pale green and emerald colors were the most beautiful, relaxing and fascinating colors he had ever seen. Legionnaire John Doe had forgotten all about the war. All nervous or psychological tension had gone from his mind. He was just feeling happy.

Then came the noise again, like somebody blowing into a bottle, and the object started rising gently, until it had reached a height of about 395' or 3,280'. Then it flew off at tremendous speed towards the North West, climbing as it went.

What the Legionnaire then felt was a sort of sadness at the disappearance of this beautiful sight. After a few minutes, this feeling began to fade, yielding place to a return of his ordinary state of consciousness, until his full mental faculties were back. He quickly picked up the telephone and reported whal he had seen. To his great amazement, however, the officer at the camp simply replied in the manner:

All right. We'll see about it tomorrow morning.

Greatly disappointed at the officer's reaction, John Doe continued his watch until he was relieved by another man in the early hours of the morning. He again reported his experience, and this time, more attention was paid to him. Some of his superiors were inclined to believe his story, because John Doe, then aged 28, was a well respected soldier and was considered serious and reliable. The majority, however, thought it was just a case of psychological trouble caused by the tough conditions of war in the desert.

A careful investigation was carried out at the scene of the sighting. John Doe recalls with a smile that the officers even examined the sand with a magnifying lens. No footprints, no marks, no alien material was found in the area, and no smell either.

Probably more for medical than for ufological reasons, John Doe was thoroughly questioned by officers. He stuck to his original story, and the affair was considered to be quite amazing. He was sent lo the Military Hospital at Val de Grace in Paris. There, he was kept for a week under close scrutiny by neurologists and psychiatrists. An electroencephalogram revealed nothing unusual. The conclusion of all the doctors was that John Doe was in a state of good physical and mental health. He had not been notably affected by the strains caused by wartime service in Algeria. He had no tendency towards drinking, and was considered to be competent for service in the Foreign Legion, which means an especially hard way of life. Indeed, no man with a tendency towards dreaming or science fiction, or with an over developed imagination or analytical, critical mind would be selected for service in the Legion.

Monsieur John Doe, who is today a civilian, is obviously a man with a strong sense of the realities of everyday life, and seems lo be just the opposite of an over-sensitive type or a poet.

Monsieur John Doe obviously is not seeking publicity. He just recounts his experience, in a natural manner, to his own close relatives, and when I met him in May 1970, he looked slightly reluctant for the first few minutes, and then answered my questions without emphasis on any particular feature.

I have been unable so far to find any evidence from military sources regarding his alleged experience. The Val de Grace Hospital in Paris does not keep documents about patients beyond a period of ten years.

The size of the reported object is so large that, if it actually was where the John Doe claims to have seen it, it must have been visible from the camp at an angle of about 60°. Yet nobody else reported seeing it. When 1 asked him about the possible reasons for his having been the only individual to see it, John Doe replied that it is in no way astonishing, since most of the men in the camp were asleep in their barracks at the time. There was a legionnaire on sentry duty at the opposite end of the camp, and he could have seen the UFO at an angle of almost 40°. And yet, that sentry reported nothing. Monsieur John Doe does not think that the slope or the irregular pattern of the ground could have been sufficient to render the phenomenon invisible from the camp.

John Doe seems to be conscious that something quite extraordinary happened to his mind, but he seems to believe quite positively in the geometrical features of his sighting. He says he has had no disease or illness of any kind since the night of the sighting, and no unusual physical or mental conditions. He has never had any other experiences involving flying saucers, either before, or since his experience at Bouahmama. What happened to him there in 1958 has left him with the belief that there is something, and that something is coming from another world to watch ours.

Regarding his amazingly peaceful state during the sighting, he uses words like: It was like time running very slowly... and It was like being in another world.

Since the experience, he had felt a certain degree of interest in flying saucers, and recalls having read about UFOs in newspapers and magazines. In any case, the subject definitely does not upset him and his experience, however extraordinary it may seem, has not notably changed his life.