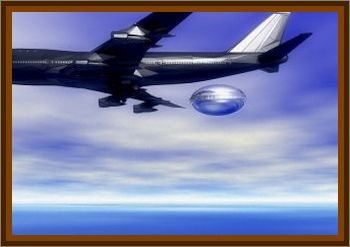 The pilot and aircrew of an Ansett A.N.A. DC-6B, call sign VH-INH, was en route from Brisbane, Australia, to Port Moresby, New Guinea.

The pilot called Townsville Ground Control and spoke to operator William Orr, informing him that his aircraft was being buzzed by a UFO. Giving his position as above or abreast of Bougainville Reef. The object was a flattened sphere with what looked like exhaust gases coming from it. It paced the airliner for 10 to 15 minutes, then accelerated and raced ahead and out of sight.

Photographs were taken during the sighting, and were confiscated. The pilot was diverted back to Brisbane and from there flown to Canberra where the film was taken from him, and he was instructed to tell no person of this incident.

The audiotapes of air traffic control transmissions at Townsville also were confiscated. Some days after this air traffic controller Orr was told to shut his mouth about the incident, with the added threat that if he didn't he might be dismissed by the Department of Civil Aviation. Townsville is a major seaport on Halifax Bay.