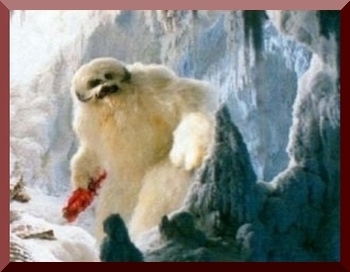 Two boys were traveling on horseback in an isolated area when a man in a tractor suddenly emerged from the valley, moving at full speed in their direction. The man was extremely agitated and told them to leave the area, that a monster was living in the Bottom, he had seen it only moments before.

The boys, unafraid, decided to investigate as the farmer drove away. As they entered further into the wilderness area, the horses refused to go any further, and they continued on foot. A few minutes later they found themselves in a gorgeous mountain meadow lush with flowers and sweet smelling grass.

One of the boys then noticed what appeared to be clumps of white fur lying near the trunk of an old tree. It looked like a dead dog or animal.

Suddenly the clump stood up and ambled toward them. It was a creature nearly 9' tall, and almost completely covered with thick, snow white fur. Where the skin was exposed it was a strange, pinkish color. Its face and posture was human like. It also emitted a powerful odor, and made a sound like a radio signal as it slowly approached the pair. The signal sounded like beep-beep-beep.

The terrified witnesses fled the area immediately. A posse was formed to hunt the creature down, but it was never found.

Dead and mutilated cows were found in the area, also a human corpse, missing its limbs from its battered torso.