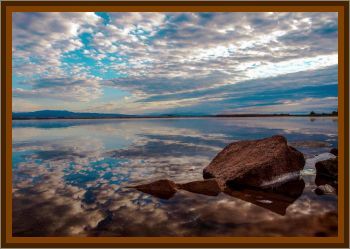 Located near Fort Duchesne, Utah, and about 150 miles from Salt Lake City is Bottle Hollow and the SkinWalker Ranch. In 1970 a reservoir was built and covering about 420 acres making Bottle Hollow one of a kind, a premiere resort built on an Indian reservation. The motel and convention center at Bottle Hollow was built with federal money to help the Northern Ute Tribe with economic diversity and provide jobs for tribal members. The resort was an attractive oasis in the eastern Utah desert. A sparkling swimming pool was the perfect site for fashion shows in the early 1980s. In the summer, Bottle Hollow Resort was also home to a popular local community dinner theater and numerous high school reunions. The dramatic decline of the oil boom in the Uintah Basin in the late 1980s, also brought the eventual abandonment of the Bottle Hollow Resort by the Ute Tribe.

In the late 1800's, congress designated seven thousand acres of the Ute land as public domain and inadvertently exempted that acreage from any official control or law enforcement. As a result many salons and brothels sprang up with outlaws, miners and soldiers from Fort Duchesne being among customers that visited.

In the evenings as the soldiers returned to the fort drunken they often passed by a ravine in which they would throw their empty whisky bottles. So many bottles were thrown in that it eventually earned the name Bottle Hollow. Bottle Hollow is now covered mostly by water from the reservoir.

The Utes believe that the lake is inhabited by several large aquatic snakes with the first serpent sightings dating back just after the area was filled as a reservoir. Eyewitness claim that they have seen on occasion things crawling around from the marina all the way down to the end of the reservoir. According to tribal police officers an inordinate number of drowning cases have occurred in the reservoir.

One case of a drowning investigated by police is that of a woman and her male friend that were swimming at night. Witnesses on the beach heard the woman screamed that something in the water had grabbed her and was pulling her under. Her male companion dove under the water and claimed that he encountered a huge, black snake and attempted to free the woman from it. The woman was eventually pulled to the surface but did not survive the ordeal. There are also accounts of strange lights entering and leaving the water. Another report mentions a bluish light exiting the water and then disappearing over the SkinWalker ridge. It does appear that such reports were taken seriously by tribal police.

The SkinWalker ranch is located nearby and seems to have some link to Bottle Hollow. The SkinWalker ranch was a hot spot for paranormal and UFO activity with the local area experiencing cattle mutilations. It is believed by some Ute Indians that a SkinWalker is responsible for all of the bizarre activity that goes on. They believe the SkinWalker to be a shape shifter.The Natural Institute for Discovery Science conducted an in depth investigation of the Bigelow ranch (SkinWalker ranch) in the 1990's.