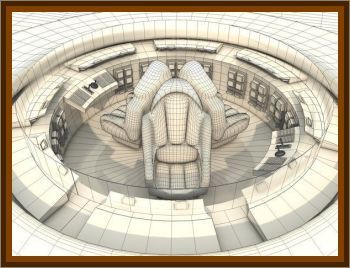 Architect Enrico Carotenuto Bossa, 46, was on the outbound leg of one of his business trips and had traveled 174 miles from Bahia Blanca and was driving alone when unexpectedly a silvery object on the ground attracted his attention. He attracted no particular attention to the object, which was to the left of the road about 1000' away.

As he approached it, he noticed strange details, such as portholes and a translucent cupola. When within 160' of the object, he stopped and looked at attentively from inside his car. He observed that there was no sign of life around the object, and thought of the wreckage of a crashed airplane. But the strange shape of the object made him abandon that idea. The clouds that were passing over, blocking the sunlight, produced a strange effect on the object. He exited the car and approached it on foot. When within 30' of it, he finally realized that it was a saucer shaped vehicle. However he did not hesitate to approach and to enter the object, whose door was open.

Before entering, however, he began to examine it in detail. It was about 30' in diameter, and was formed of two parts, the lower one shaped like an inverted saucer, and the other, above it, cylindrical and topped with a cupola. Above the cupola, a strange round lantern. Its total height was about 13'. There were a certain number of rectangular portholes with very rounded corners. The object was lying on the ground at an angle of about 20°, supported by a rise of the terrain. It was of an extravagant chromium color, magnificently polished, in which his image and that of the sky were reflected. It seemed like something dead, no life, no sound, and no vibration. He looked for the door, which was open and precisely and the foot of the tower.

After further inspection the witness realized that the object was not new, because the lower edge of the saucer was a trifle damaged and irregular in some places. He had to crouch down on all fours to climb up to the door, whose size was about 3' by 4'. He stuck his head inside, but couldn't see much of anything because it was rather dark. He smelled a strong odor of ozone and garlic. He jumped in on the floor, which was about 2' down. The floor was a surface, which seemed to give slightly beneath Bossa's weight. The cabin was perfectly circular, about 7' high, of a dark color. Around its wall was a row of portholes, very thick, glazed with some transparent material resembling Plexiglas.

Once his eyes adjusted to the dim light, the scene he saw was horrible. At the center of the cabin, which was about 11½' in diameter, was a strange kind of chair occupied by a man 4' to 4½' tall, dressed in a lead gray coverall, his round head, with sparse light colored hair, was resting on his chest. His well formed hands, of a light tobacco brown color, were tightly gripping two handles that emerged from a black box a few inches from his body. His face was of the same color as his hands, having a well formed straight nose, with no mustache on his lips or hair on his cheeks. The eyes were large, very dilated and glassy. The form of his body, as far as he could see, was perfectly human, and one could see no indication of animal nature. He resembled a 15 year old adolescent but with the features of a man. He was not a dwarf.

He touched one of his arms, which was rigid, and his face was cold. The collar of the coverall fitted closely around his neck, and the same was true of its cuffs at the wrists. The feet were resting lightly on two tubes fixed to the floor and serving as a support. The coverall seemed to be made of hard leather, and was puffed out at the shoulders, giving the pilot the appearance of a rugby player. The man was not fastened in. His chair was of a form that was quite adequate for his body, and was of a vermilion red color. A central post supported it. The black box in front of the pilot resembled a dashboard, and was about 3' and 2½' wide, on it could be seen cats eyes, of the magic eye type, such as one sees on certain kinds of radios. Below this panel, and slightly above the feet, was to be seen a wide horizontal band with a vertical needle and certain strange signs that undoubtedly represented numerals.

At the right of the pilot a bit in front of the panel, was a semi opaque disk, liked a turned off television screen. The most affecting sighting, however was of two other identical men, lying on two wide, comfortable divans against the walls of each side of the pilot, who likewise appeared to be dead. They were not fastened in, and no straps were to be seen. Their eyes were wide open and terrified, their mouths slightly open and a bit swollen. There was a third divan, which was empty, he touched it and found to be a very soft material. The absence of the fourth member of the crew, who had evidently gone out and left the door open, began to preoccupy Bossa. His attention was then attracted to two strips on the floor, of rectangular cross-section and 1½" high, running from the center to the periphery, where they ended on each side of the door. He also noted above the instrument box, a transparent sphere 10" in diameter surrounded by a flat ring inclined 40° in the horizontal, exactly resembling the planet Saturn. Raising his eyes he noted that the cabin walls were not continuous with the ceiling, but where they joined, the slightly concave ceiling had a sharp, circular protrusion, with rectangular holes 24" wide by 8" high. This perforated molding was repeated in the same way around the floor. A luminous, slowly blinking ceiling light emitted an orange white light.

Suddenly a mad panic seized him and it took a conscious effort to recover his nerve. Once on the ground Bossa felt dizzy from breathing normal air again, realizing how difficult to breath and how heavy the air had been inside the object. He ran back to his car and noticed that unexpectedly the motor was very difficult to start, the starter working sluggishly as if the battery were discharged. Once he arrived at General Acha he told his friends of his adventure and after being convinced, with much difficulty they agreed to accompany him back to the site. After a violent thunderstorm they arrived at the place. They looked for the craft, but could not find it. Their attention was attracted to a pile of ashes about 6½' high and 16' diameter, located exactly at the place where he had seen the saucer. These ashes were silvery red in color and were smoking slightly. He then put his hand on them and guessed that their temperature was about 104° F. At that moment the men looked up to see a saucer identical to the one Bossa had encountered, flying over them at an estimated height of 1/4 mile. He took a photo at the same time that the object rose up at a great height, a second identical object could be seen above it and still higher up, they could plainly see a motionless cigar some distance away from them. The two saucers moved to the cigar rising obliquely. As the saucers accelerated they changed from silvery to rose-colored. In a few seconds the two saucers rejoined the cigar, into which they disappeared, and immediately the cigar took off at lighting speed.